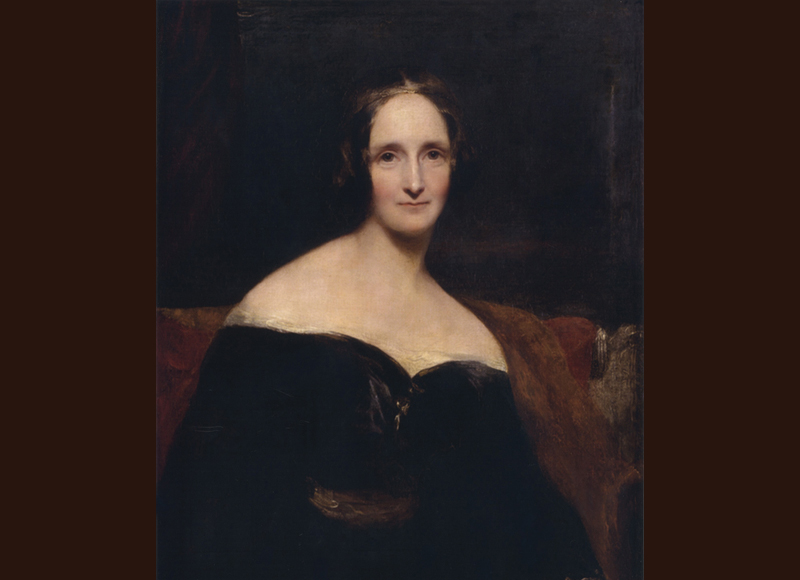 With proposals for a new ‘Mary Shelley’s House of Frankenstein’ museum  in Gay Street recently  revealed,  we look back at a piece written for us by Jenny McAuley in 2017 exploring the city’s links with the Gothic writers of the last 200 years

It was just over 200 years ago in December 1817 that Jane Austen’s famous parody of the Gothic novel, Northanger Abbey, was published. Appearing six months after the author’s death in July 1817, it affectionately mocked the melodramatic conventions of the Gothic romances of her youth. Like Austen’s last-completed novel Persuasion (with which it was simultaneously published), Northanger Abbey also evoked the streets and social life of Bath as experienced by Austen while visiting in 1799, and living there between 1801 and 1806.

It’s only when Austen’s teenaged heroine Catherine Morland leaves the polite Assembly Rooms and bustling shops of 1790s Bath for mysterious Northanger Abbey that she begins to think her Gothic fantasies, fuelled by the sensational fictions of Ann Radcliffe, might be coming true. But Bath is steeped in Gothic histories of its own. Although its harmonious neo-classical architecture, and its fame as a health spa, may not immediately suggest the uncanny, Bath has been home to some of the most iconic and influential English women writers of Gothic fiction.

For the fictional heroine Catherine Morland, Milsom Street is a significant location because it is where the object of her affections, witty Henry Tilney, is lodging. As a fan of Ann Radcliffe’s phenomenally successful novel The Mysteries of Udolpho (1794), however, Catherine might have been still more interested in Milsom Street had she known of its associations with Radcliffe – whose parents, William and Ann Ward, ran a showroom there for the porcelain-makers Josiah Wedgwood and Thomas Bentley.

Having begun work at the first Wedgwood showroom in Bath (at Westgate Buildings) in 1772, William Ward relocated it to 22 Milsom Street in 1779. Although the young Ann Ward appears to have spent much of her childhood in the household of Wedgwood’s business partner Thomas Bentley (her mother’s brother-in-law) near London, she was certainly residing at Bath at the time of her marriage to the London journalist William Radcliffe, whose radical political views she shared. Their wedding took place at St Michael’s Without Church, Broad Street on 15 January 1787, when Ann was aged 23.

Ann Radcliffe perfected a formula that characterised a specifically female strand of the literary Gothic for decades to come. The ‘female Gothic’ focused upon distressed heroines trapped in sinister castles or abbeys, which represented the constraints placed upon women’s lives under the patriarchal laws of 18th and 19th century Britain. Radcliffe herself learned from earlier authors such as Sophia Lee, another Bath resident. The daughter of actors, Lee established a prestigious (and profitable) girls’ school on Lansdown Road along with her sisters Harriet, Charlotte, and Anna in 1781 – initially funding the enterprise with proceeds from her dramatic writing. By 1786, the sisters had resettled their school at the larger Lansdown Road premises of Belvedere House.

Sophia Lee’s 1784 romance The Recess, about the fictional adventures of two equally fictional daughters of Mary, Queen of Scots, is wildly far-fetched and over-sentimental to modern tastes. It nevertheless significantly influenced the development of historical fiction in England – while featuring such defining Gothic hallmarks as dark, imposing architecture (the action of The Recess opens with the heroines secretly confined in a system of underground chambers, beneath a ruined monastery).

When Sophia Lee died in 1824, her obituary in the Gentleman’s Magazine mentioned that she had been acquainted in Bath with the young Ann Radcliffe (‘Miss Ward’), adding that Radcliffe was an admirer of The Recess.

Radcliffe biographers have doubted later claims that she attended Lee’s school, as she was already aged 17 when it opened; though it did admit young women up to about age 19 as ‘parlour boarders’, for training in etiquette and fashionable accomplishments.

20 years on from Radcliffe’s 1790s heyday, another young woman writer made Bath her base as she drafted perhaps the most famous of all female-authored Gothic novels: Frankenstein (1818).

As her journal precisely records, 19-year-old Mary Wollstonecraft Shelley lived in Bath between 10 September 1816 and 26 January 1817, settling first at 5 Abbey Churchyard (which no longer exists). She travelled there with her unmarried stepsister Claire Clairmont, who was then pregnant by English Romantic poet and politician Lord Byron.

Wollstonecraft herself was first employed as a lady’s companion on Milsom Street, near the Wedgwood showroom run by Radcliffe’s parents, during 1779 – 80. After Wollstonecraft’s death, Godwin also visited Bath in 1798, during his unsuccessful courtship of Sophia Lee’s sister and fellow author Harriet Lee.

Mary Shelley’s work on Frankenstein in Bath formed part of a routine of writing, reading, drawing, and caring for her year-old son William, steadily maintained despite the traumatic events of that autumn. She recorded her progress in letters to Shelley, frequently absent from her on business in London. On 5 December 1816, she reported having just completed the fourth chapter of Frankenstein – in which the monstrous creature comes to life on ‘a dreary night of November’.

There’s still a dark thrill to be had from reading Mary Shelley’s tale of the creature: ‘By the glimmer of the half-extinguished light, I saw the dull, yellow eye of the creature open; it breathed hard and a convulsive motion agitated its limbs . . . I rushed out of the room.’

Bath’s gothic echo continues down through the years. In the 20 century, it was while living on Hay Hill just off the Paragon, between 1973 and 1976 that Angela Carter began the dark fairytales collected in The Bloody Chamber (1979), which updated the ‘female gothic’ tradition of exposing patriarchal abuses. Carter was particularly alert to Bath’s eerie aspects. In her 1975 essay Bath, Heritage City, she noted the Anglo-Saxons’ superstitious fear of the site, with its crumbling Roman ruins and mysteriously heated waters.

Carter herself loved the ‘haunting silences’ of 1970s Bath, and its then still-lingering atmosphere of faded Regency glamour – and perhaps even in today’s larger, livelier city, a hint of the gothic spirit that has inspired so many great authors might still occasionally be felt, as the nights draw in.

In the mood for the gothic?

Seekers of darkly romantic spots in Bath will find the city’s many historic graveyards a happy hunting ground. The 120 foot folly, Beckford’s Tower at Lansdown, built in the 1820s by William Beckford is a particularly evocative spot to visit, its air of mystery enhanced by the fact it stands in a cemetery. The museum is open regularly, giving visitors the chance to climb the dark stone spiral staircase to the viewpoint belvedere at the top; beckfordstower.org.uk

The company behind the proposed museum, Bath Attractions Limited has applied to Bath and North East Somerset Council to convert a five-storey Grade II listed townhouse in Gay Street, Bath. The company said it would be a “multi-sensory, fully immersive and family-friendly” attraction and commemorate the novelist’s work and links to the city. Their plans include a permanent exhibition showcasing the life of Mary Shelly and her classic novel Frankenstein. The council will make their decision by the end of June.