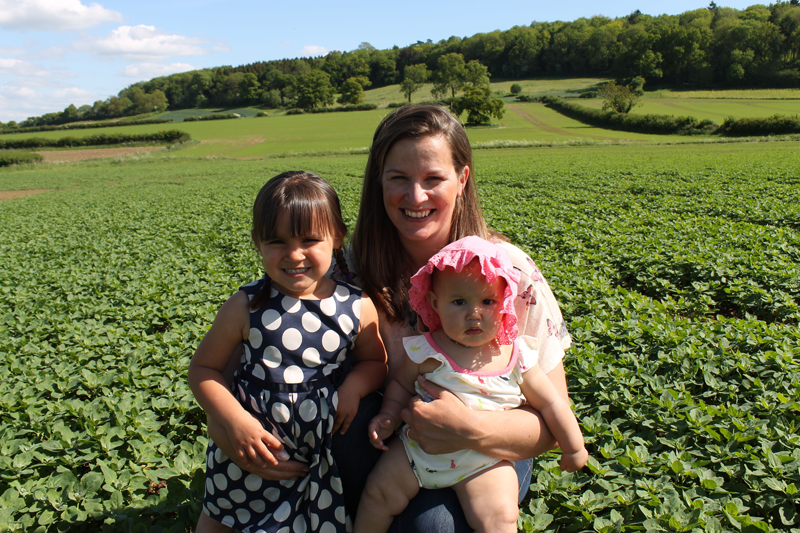 Take a look at this crop which is growing in fields near Bath. Can you identify it? Come to think of it, if you can, how do you pronounce its name? Quinoa easily knocks chorizo, paella and endive from the top of the pronunciations charts, and turns talking about bruschetta into a breeze. So, let’s settle the debate. It’s not ‘kwinoa’, nor ‘kwhynooah, it’s ‘keen-wah’ – and right now this ancient supergrain is thriving at Corston Fields Farm, just five miles west of Bath.

Farmers Gerald and Ros Addicott have nurtured crops of wheat, barley and oil seed rape at Corston since 1985. In 2012, their eldest granddaughter Rosa was diagnosed as gluten-intolerant. Rosa’s mum Emily Addicott Sauvao began to experiment with different wheat replacements to supplement Rosa’s diet. It was when Emily discovered quinoa that, in her own words, ‘a light bulb pinged in my head.’ And lo, the seeds of our August food hero’s business venture were sown.

Emily says: “I’ve always been interested in producing a crop on my parents’ farm that we could sell directly to the public. When my personal interest in quinoa was piqued, the inspiration hit me. I did a bit of research and ran a trial crop which turned out to be really successful. I was documenting my journey on Twitter (@bathfarmgirl), and the Shropshire-based British Quinoa Company got wind of what I was doing, and asked me to become a grower for them.

“Last year we produced a bumper crop of 40 tonnes of quinoa, the bulk of which went to the British Quinoa Company and then on to Pret A Manger and Waitrose. But I kept a proportion back to sell into our local community under the Bath Farm Girls brand (the other two-thirds of my company are my two little girls) and we sold our first retail pack of wholegrain quinoa to Babington House in Somerset last May.”

Good stuff on many levels indeed. “Quinoa is a very versatile little grain,” Emily explains. “It’s actually classed as a vegetable – not many people know that – and it contains all nine essential amino acids, making it a complete protein source. It’s naturally high in dietary fibre and it’s a slowly-digested carbohydrate, so you don’t get any of that ‘sugar-peak’, carb-related sluggishness after eating it. It cooks quickly and can be served hot or cold, it freezes really well, and it’s a great alternative to rice, pasta and couscous. Quinoa flour is also great for baking because of its high protein content; anybody who bakes with gluten-free flours will know how tricky it can be, but because quinoa flour retains a bit of elasticity, it doesn’t fall apart when baked.” It really is all things to all people – what’s not to love?

Emily is rightfully proud of her achievements in being one of just a handful of farmers nurturing and promoting a crop that, until fairly recently, languished in the dusty corners of small independent health food shops. “It’s really fulfilling to have produced an end product that I can see on shop shelves, and know that I’ve nursed that crop from a tiny seed in the ground through to it being packaged up and labelled right here on the farm.

“And because I’ve personally managed every single grain that goes into those packages, it makes me so proud to get Tweets or Instagram-tags from customers using my quinoa in their recipes. The first time somebody did this I was out in the field driving a tractor and I burst into tears. I must have looked like a mad woman, but it was so satisfying to see someone enjoying the fruits of so much hard work.”

That hard work is ongoing. Emily is hoping to develop other gluten-free crops on the farm while experimenting more with quinoa. Quinoa flakes are on the way, with further cereals, snack bars and flavoured quinoa in the experimental pipeline. Daily life on the farm, meanwhile, must go on.

“Every working day is different and that’s what I love about farming. As you read this feature, we’ll have probably finished harvesting our barley and be moving on to looking after our wheat. I’ll be flat out in the fields between now and mid-October harvesting, drying grain, preparing the earth for planting, cultivating, ploughing and getting ready to plant next year’s crops. In between all that I’ll be preparing orders, answering enquiries, developing recipes – but I’ll always make sure I spend as much time with my family as possible.”

So who might be our farm heroine’s own food heroes be? “I love Jamie Oliver’s passion for getting kids into good food, and putting healthy meals into schools – I’m a strong believer that if kids can be involved in the growing and preparation of food from as early as possible they’re much more likely to make healthy food choices later in life. But as we have pre-school aged children, my husband Eddie and I don’t get out much. We have, however, enjoyed the occasional celebratory meal at The Pig Hotel (at Hunstrete, near Bath), and we had a delicious roast at The Cowshed in town recently.

“But I like cooking for the family at home – quinoa naturally falls well into a lot of summer dishes as you can make so many delicious salads with it. We love simply mingling it up with diced avocado, cherry tomatoes, spring onions and a squeeze of lime. To accompany that, Newton Farm Shop in Newton-St-Loe have some lovely homegrown produce, and fantastic barbecue-ready meats. My parents live next door, so we also tuck into whatever comes out of mum’s greenhouse. The strawberries have been a hit this year but I have to wrestle the kids for them and I normally lose. I’m also bit of an ice cream addict, loving the flavours of the Chew Moo’s range, made in Dundry.”

Emily is an inspirational food hero indeed: the down-to-earth, hard-working farm girl who keeps it local, poised to be a superfood superstar. You might say ‘kwhynooah’ – I say, ‘kwhy not?’

Main image: The Bath Farm Girls aka Emily with daughters Rosa and Charlotte.