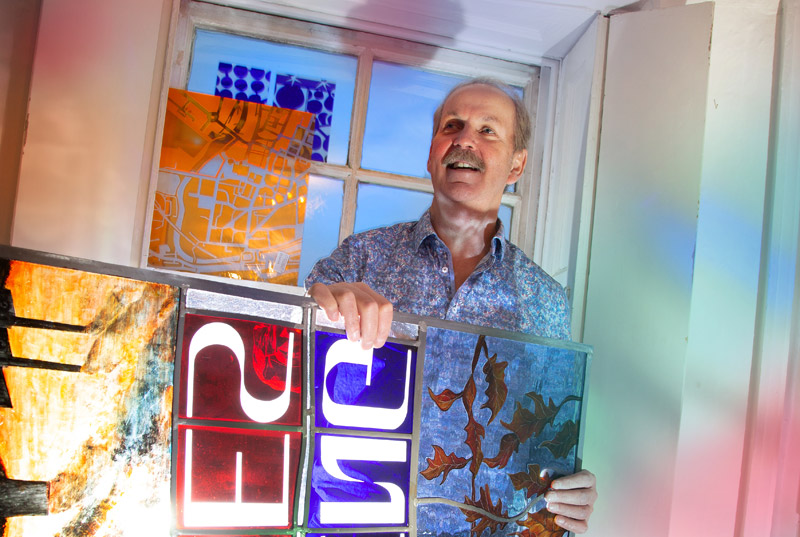 I moved to the beautiful city of Bath just over two years ago, having lived in London and Surrey for the previous 40 years. I decided to make a new life in a different part of the country following the loss of my late wife in 2016.

I chose to live in the centre of this vibrant city as it offers such an incredible range of activities to enjoy and appreciate – beautiful architecture, art galleries, extensive music and theatre productions as well as the diverse array of shops and restaurants, all within easy train proximity to London.

Subsequently I have met and married Anne, an interior designer specialising in lighting who has her business, Enlighten of Bath, on Walcot Street. She has introduced me to the joys of tennis at Lansdown and Excel Tennis in Royal Victoria Park from where I also enjoy early morning runs down to the river.

I studied Fine Art (painting) at Central St Martins in London under Patrick Reyntiens OBE. Patrick is the most significant stained-glass artist of his era and he created the stained glass at Coventry Cathedral and Liverpool Metropolitan Cathedral, in collaboration with John Piper.

Stained glass was studied as a subsidiary subject, and I never imagined that this would form my future career. In my early twenties, I received a large commission for a private residence which led to further commissions for a central London law firm to create a backlit stained glass window depicting the London skyline, still a main feature in their offices. I received subsequent commissions in hotels, restaurants, corporate headquarters, all the time working on smaller domestic windows.

Over the years my work has taken me around the world, with commissions in the Middle East including creations for the Prime Minister of Bahrain and the Crown Prince of Kuwait. There have also been numerous commissions in Europe, the USA, the Caribbean and the Maldives.

My clients usually have initial ideas, and through discussion we develop these thoughts into a stained-glass concept. My projects are diverse, both in design – from traditional to contemporary interpretations – and in the type of buildings: residential, commercial and ecclesiastical.

Stained glass can be created to great effect both internally and externally. I have created many internal features which have been wall-mounted with LED diffused lighting to illuminate a corporate identity or a cityscape or to depic the history of an institution. Recent and current projects include two large stained-glass windows depicting the 150th anniversary of a Roman Catholic school in Surrey and the 200th anniversary of a Josephite community.

The range of applications for stained glass are enormous and as well as producing artworks for walls, doors, room dividers, and screens I have enjoyed installing beautiful glass into large domes and roof lights.

I am currently completing an intriguing commission for an art collector, a large wall-mounted backlit panel reflecting elements of climate change, war and poverty. Life has now come full circle and I am also once again working on a piece for a London law firm.