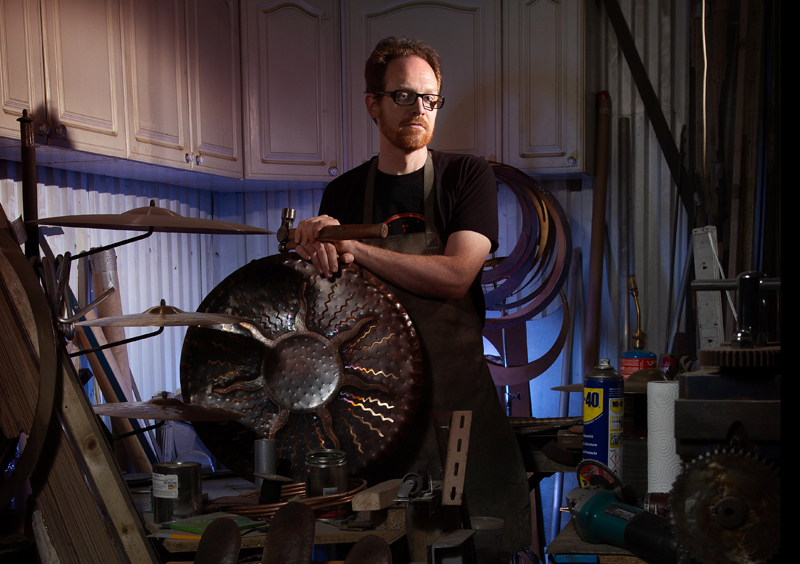 I was brought up in Blackburn and had what would now be considered quite an old-fashioned childhood. Playing outdoors with go-carts, climbing trees, mucking about outside with friends and reading multiple Beano magazines. All ‘too risky’ for kids nowadays, but great for developing the imagination. My dad was a great ‘tinkerer’ and had a workshop in a shed full of wonderfully intricate tools, switches, cogs, knick-knacks, junk and clocks. He specialised in repairing these in his spare time, although he was actually in the vending machine business. There was a time when there were big plans to create 24-hour shops that were fully automated but I think this was an idea ahead of its time.

I went to school locally at St Augustine’s Secondary in Billington. It had a great reputation for music, and under the guidance of a brilliant man called Peter Rose we won a Pebble Mill competition with an original script by Anne Conlon called The Daughters of Pendle – it was a tale of our local witches. This led to The World Wildlife Fund commissioning a new musical called Ya No Ma Mo. It was put on at the Barbican in 1986. I was in the 150-piece choir and throughout my involvement with these musical productions learnt many things. Discipline, hard work (intensive rehearsals every Sunday!), logistics (I had to set up the instruments and stands everywhere we went) and then ultimately the drums! We travelled to the United States with the musical and played at The Kennedy Centre, the zoo, The Cathedral Church of Saint Peter and Saint Paul and Trinity College, Washington. The parents contributed time and money and local companies sponsored us to make it all happen. We later successfully nominated Peter for an MBE for services to education.

All this musical background and love of instruments and mechanics inherited from my father led me down the technical route and while studying for A levels in Blackburn I formed and joined many bands including Alter Ego and No Hot Ashes – with marketing placed on dustbin lids!

I came to study electronics and engineering in 1992 at the University of Bath. My first job was for Pioneer in Bristol; I have since worked for a number of other tech companies including Pico Chip in Bath where I designed two patented chips. While there I had the freedom to work from home in the daytime so was able to make lots of noise with my new toy.

Since then it’s all been very exciting trying to turn my hobby into a full-time business. I went to the Frankfurt Musikmesse in 2008 and met some kindred spirits and even took a few orders. I then went back in Easter 2009 with the help of a UK Export Grant. I got a big order from La Baguetterie in Paris, not a baker but a well known drum shop. I now make cymbals for orchestral percussionists; gongs of numerous types for drummers, orchestras, as art pieces and for meditation or sound therapy purposes; triangles; tubular bells; bell plates; new hybrid instruments; and authentic recreations of ancient instruments.