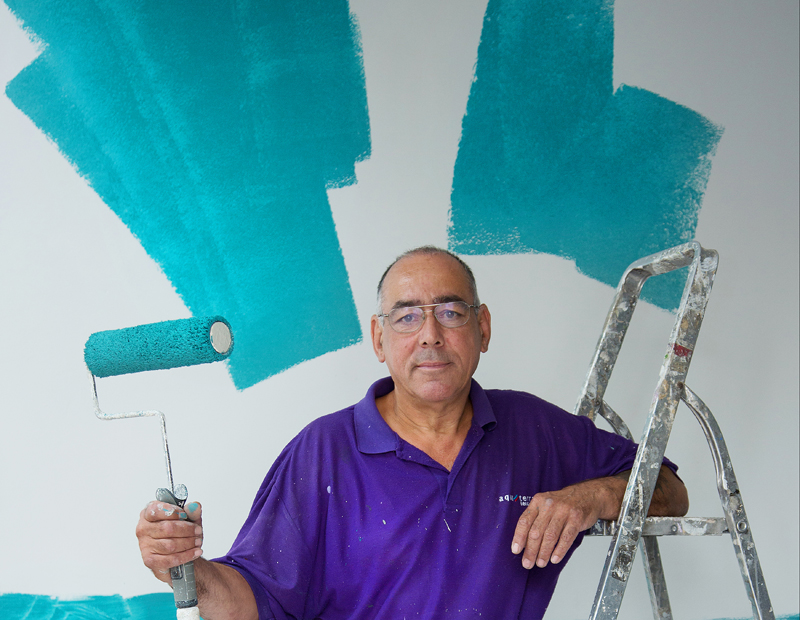 I was born in 1954 in the Chinese laundry on Walcot Street, Bath (on hot wash!). I lived at James Buildings near Hedgemead Park. Dad worked in the sooty, smoke-filled Bath foundry at the end of Walcot Street, while mum worked at the laundry until we moved to Odd Down in 1962. I moved from the small Walcot Infant School to Fosseway Junior School, with the much-respected Mr Jerome the head teacher. Life for kids back then seemed so much more adventurous, with self-run games of football going on until the winning team reached 30 goals or more. We also played knock knock ginger, forty forty, street rounders and hopscotch.

Showing an artistic flair for drawing, painting and lettering, I was nominated for a place at The Bath Art School. I managed to impress and acquire a position at the school. I was delighted, so you can imagine my horror at being told that I also had to study maths, English, history and science. I can remember telling them: “No, you don’t understand, I’m here to draw and paint.”

Five years later I was ready to join the working community and fulfil my dreams of becoming a sign writer, only to find that traditional sign writing had largely been replaced with neon and vinyl lettering. I decided to try my hand at painting and decorating instead, working for a local building company while trying to build my own customer base, as I always intended working for myself. It didn’t take long for me to become self-employed. The 1970s and early 1980s were a busy time for me, carrying out decorative finishes such as wood graining, marbling, paper hanging, tiling, artexing and coving.

I’ve always had lots of hobbies and interests but photography has been one of my favourites – I would spend hours in my darkroom developing and printing my pictures. Eventually I was asked if I could photograph the wedding of a daughter of a family friend and agreed. Things moved rapidly from there with many requests for wedding photography based on the photographs I had taken.

I initially did this alongside my decorating work but this meant that the majority of my time was spent away from my wife Yve and my young son Jake (Charlie was then just a twinkle in my eye). A year or two later, I decided to take the plunge, work full-time in photography and opened a wedding and portrait studio. I also took the annual photographs at many of the city’s schools and some commercial work such as album covers for local music artists. Yve came to work with me when our two sons started school, so for the next 18 years we based our work around them, enjoying their young lives and achievements immensely.

When digital photography came to the fore, I decided to return to decorating. I did not forget the skills of more than 20 years earlier and am currently enjoying decorating commercial and private properties in and around Bath. Neill has photographed me decorating the Graham & Green shop in Walcot Street, so my life has come full circle.