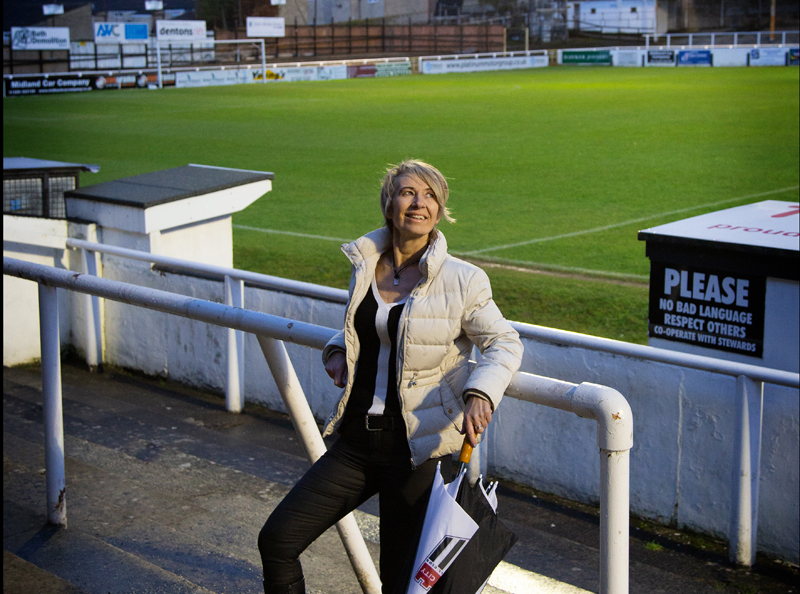 Our series of photographic portraits by Neill Menneer shows Bath people at work.

I went to a convent school in Cheltenham and always felt a bit intimidated by the genteel surroundings so wanted to rebel. I started to get into football around the age of ten – I always say football was my ‘punk’ because back then it was a way to be different as a girl. Initially I supported Liverpool seeking the glory – a premiership club is often a ‘gateway drug’ as it were. However I soon discovered that following more local teams was far more rewarding and began following Cheltenham Town FC. When I was at Reading University I would watch Reading and later, when I worked in Frankfurt, I became a season ticket holder at Eintracht Frankfurt. On graduating with a Latin degree I initially worked on the graduate scheme at KPMG, then got a job selling computers in Germany. I was there for eight fantastic years and the job combined everything I had learnt as an accountant from purchase ledgers to payroll and more.

On moving back to the UK I landed a really varied role with Lester Associates who provided an all-round service to Commonwealth IT specialists working in London. We helped with accommodation and recruitment and acted as a kind of agency. After the birth of my first child I decided to go to law school as I had always enjoyed the legal side of things. I had litigation experience in both Frankfurt and London and had also been involved in contract law. I also wanted a more focussed professional qualification. I was duly admitted on to the roll of solicitors in 2006 after completing my legal qualification while working for a printing trade association. I ran a legal helpline for members from home and this suited me at the time as I now had two children (Roman and Alexandra).

I left in 2016 with no fixed plan, but as a result got involved in volunteering. Firstly at the Port Elliot Festival down on the south coast and then at Bath City Football Club where I ran the shop on matchdays. This was the beginning of my involvement with the Twerton club and it was an important time as it faced some existential challenges. It was in debt and urgently needed a rescue plan. The successful community ownership bid offering shares to the public and fans was successful and allowed us to pay off some of the immediate debt.

We believe we now have a sustainable future with a robust business plan that involves a partial development of our ground. We have a joint venture with Greenacre Capital and our proposals for the site are really exciting. They offer so many benefits to the area and community. We will get a brand new grandstand, the high street will be redesigned and improved, as will the facilities in the stadium which will provide new income streams to support the club. Non-match revenue will come from many fresh sources including the sports bar, gym, hot desking office space and hiring out the new artificial surface pitch to schools and other sport teams. WECA, through the Love Your High Street Initiative, will also be providing an additional £650K. All in all it’s a massive boost for City, Twerton and Bath. I can’t wait to see this bright new future emerge…