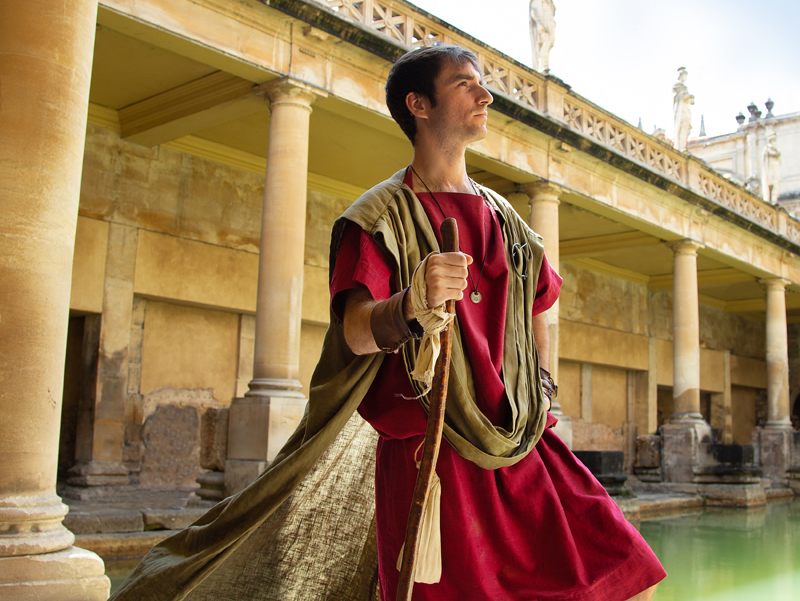 Our series of photographic portraits by Neill Menneer shows Bath people at work.

My name is Peregrinus and I am a freeman born in Trier in Germany. My father was a successful trader shipping goods up and down the Moselle and Rhine. He employed around 40 people, although 30 of them being slaves were, fortunately from our point of view, unpaid. He taught me many things but had limited ambitions and was too risk averse whereas I have no such limits to my imagination or self-confidence. He was happy to stick to his known territory around Cologne but I have ventured forth much, much further. My plan from the beginning was to create a round trading system where my boats are never empty of goods to sell. Firstly I ship pottery to Cologne and from these proceeds buy beautiful glassware which I then ship to London and the provinces. On my return trip I buy not just grain but many handmade military goods for the legionaries back in my homeland. On my first trip to Caerleon and Exeter I came via Bath and enjoyed myself immensely. I was weary from dragging my oxen along the Fosse Way from Silchester and so the massages I purchased at The Baths were a great relief. I was even able to employ a scribe and priest to write a ‘defixione’ or curse to whoever stole my lovely cloak in Silchster (may he or she be for ever damned!). I am now ‘played’ convincingly by Adrian Hamilton and so have become almost immortal. I will let him tell his own story although it’s not as exciting as mine!

Unlike Peregrinus I was born in this country. In Crawley, in fact. I loved acting at school and played the main role in Beauty and The Beast. While studying drama at Bath Spa University I met Fergus Dunlop from The Natural Theatre Group. Soon after, I went with them to China and played a range of their well-known characters like The Pink Suitcase, The Grey People and The Cone Heads. I studied the ‘Art of Being Silly’ under Jacqui Papay. She taught me many of the skills you need to pull off ‘street theatre’ – the importance of making a visual frame around yourself, an understanding that what you don’t say is as important as what you do and how to interact with the audience. This comes in useful as I’ve got involved in Theatre in Education in schools in and around Bath and Shepton Mallet both for The Natural Theatre Company and Hammerpuzzle Theatre Company. So when I play a swashbuckling pirate in a school, I recruit my crew from the class, and equally Henry VIII needs attendants for his ‘privy stool’! Despite my rather dramatic job I live a quiet country life.
I live with my wife and our two children in West Buckland
and we’re very involved in village life, with fundraising and committees. Not something that would appeal to my alter ego but, however arrogant he might appear, I do enjoy playing Peregrinus at The Roman Baths. And no-one’s stolen my cloak!