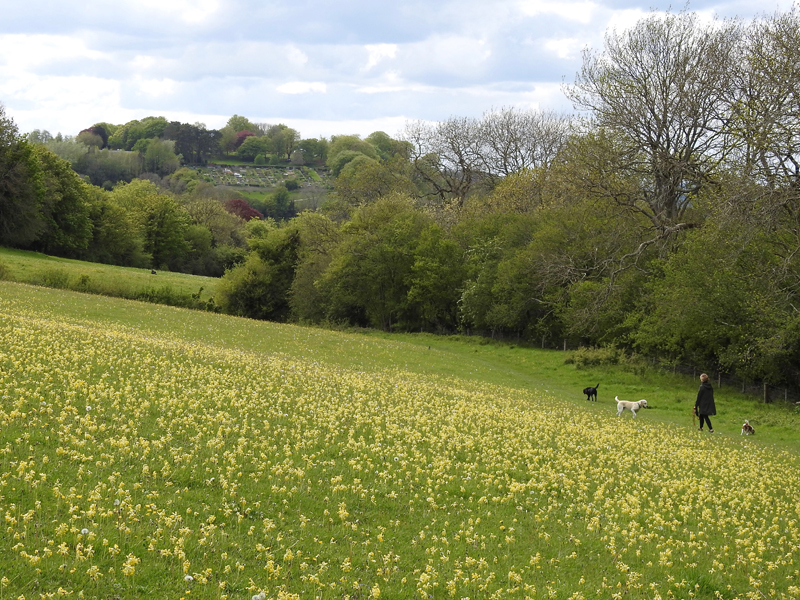 Back to nature: our modern-day
connection to the environment

Urban ecologist Professor David Goode looks back at our modern-day connection with the environment, assesses how nature in recent years has become more centre stage, and explains why this is meaningful for the future

Throughout my working life as an ecologist I have been acutely aware of two critical impacts on the global environment. One is the enormous scale and rate of species extinction, the second is climate change. Both have intensified with each passing decade. Both result directly from human activities. From a global perspective it is clear that human actions continue to have a disastrous effect on natural ecosystems. So it will be no surprise to hear that I can become despondent. But I am recently becoming more optimistic.

For several years in the UK we have seen growing concern about environmental matters, with increased recognition of the value of nature to humanity. Creating greater connection between people and nature has become a major feature of the environmental agenda, spawning a wealth of new initiatives from local residents’ groups and primary school activities right through to local and national government.

How has this come about? Television documentaries, notably Sir David Attenborough’s series Planet Earth, no doubt played a part in raising public consciousness of environmental problems. Blue Planet II was the most-watched television show in the UK in 2017, with more than 14 million viewers. Any bookseller will tell you there has also been a huge surge in ‘nature writing’, with a large number of new and distinguished authors involved. They include academics, naturalists, farmers and journalists who have promoted a climate of enthusiasm for nature that is beginning to permeate society across many different fields. The quality of the literature in this genre is a major driving force. There are spellbinding tales for younger readers too, such as local writer David Almond’s Bone Music which explores long-established deep connections between ourselves and nature.

The value of nature in promoting health an­­­­d well-being, including mental health, is also well-established. The NHS has links with environmental centres to which patients are referred by their GPs to take part in activities that allow them to ‘regain their own health’. The Eden Project in Cornwall is one such centre. Others are specifically designed for people to connect with nature in towns and cities. At a local level there are numerous opportunities for people to connect with nature, such as by joining natural history society field meetings, or joining a group to listen to the dawn chorus. They can even participate in citizen science projects monitoring changes in the distribution of species. Apps can now be used to explore local wildlife sites and grants are available to improve access to nature and encourage people to get involved. Here in Bath we have benefited from grants from the Heritage Lottery Fund for the Bathscape Project, a major project relating to the landscape of woods and meadows that form part of the UNESCO World Heritage Site, also for Sydney Gardens and Smallcombe Cemetery.

The second issue is climate change. I first read about it in the 1960s when it was referred to as the greenhouse effect. Although the issue had hardly entered the public arena, climate scientists and ecologists were already clear that the earth’s atmosphere was getting warmer as a result of the increased concentration of CO2 due to burning of coal and oil. I predicted in 1982 that there would be severe environmental consequences within the next 50 years. The wider public woke up to the problem in the 1980s and decisions were taken at the United Nations Earth Summit in Rio in 1992 for countries to limit emission of greenhouse gases. Sadly, emissions have continued to rise over the past 30 years and are still rising. Without immediate action to reduce emissions it will become impossible to prevent an increase in temperature exceeding 1.5°C, a goal that would prevent the most damaging effects of warming.

However, I am heartened by the new awareness that has spread across the world since 2018. Greta Thunberg has had an astonishing impact since she embarked on her school strike for climate outside the Stockholm Parliament in August that year. She mobilised millions of young people to take action to persuade governments to take climate change seriously as a global crisis. In a series of speeches to world leaders she made it clear through plain speaking that they have failed to address the simple truth that use of fossil fuel has to stop. That means now. “If the emissions have to stop, then we must stop the emissions. To me that is black or white. There are no grey areas when it comes to survival. Either we go on as a civilization or we don’t” (Thunberg, 2019). Our local Council, B&NES, declared a Climate Crisis in March 2019. This year the new US President Joe Biden has put climate change at the top of his agenda and is already pressing world leaders to take real action. This year is crucial. The UK will chair the UN Climate Summit in November. We have been waiting too long for positive action. This time it has to happen.

Coronavirus struck in January 2020. Can we ever forget the extraordinary effect of the first lockdown in March? My first impression was that air pollution in Bath had suddenly abated, the sky was clear and unusually blue, and at night it was filled with stars. The Milky Way was magnificent. But for me it was the silence that was most profound when we first experienced the lack of background noise. It was eerily quiet with hardly any road traffic, trains or other sounds of the city. The only sounds were the birds. Their songs seemed to be enhanced by the stillness. Many people commented that they had never noticed them before. Others asked why the birds were singing so loudly. Most striking, of course, was the absence of people. The centre of Bath was suddenly deserted and even on our local walks in Widcombe we hardly saw a soul. Everyone was indoors. It seemed at times as if we were living through a science fiction drama.

Animals reacted in different ways. Even in the first days of lockdown there were reports of wildlife taking advantage of the absence of people to invade towns and cities. A herd of feral Kashmiri goats hit the headlines browsing in gardens along streets in the centre of Llandudno, and there were reports of wild boar running amok in several Italian cities having invaded from surrounding forests. In contrast, the gulls that nest on rooftops in our city centre seemed nonplussed by the absence of people. Small groups flew around in disarray, frantically searching for scraps of food, all to no avail. Very few pairs raised young in 2020, partly because of lockdown but probably also as a result of the extremely hot weather in spring and early summer.

During lockdown I made a recording of the dawn chorus in Bath. The performance was unusually long, well over an hour instead of the usual 20–30 minutes. I recorded 24 different species that morning. Sometimes it was a cacophony of blackbirds, robins and wrens; at other times song-thrushes and blackcaps dominated the chorus. Intermittently I heard the fluty notes of a nuthatch, and at times the deep croak of a raven from its nest nearby. There were even the soft tinkling voices of goldcrests, our smallest British bird. The recording was broadcast on our local Bath radio Imperial Voice which prompted many people to get in touch asking for a commentary to identify the species, which I was happy to provide. You can hear it on the Bath Natural History Society website.

One of the most profound effects of lockdown has been the realisation by many people that nature is all around us. Certainly people have appreciated all the parks and green spaces available in Bath, from the formality of Parade Gardens, or the green expanses of Victoria Park and Bathwick Meadows, to the wildness of the Skyline walk. We are not alone. The Office for National Statistics reports a huge increase in use of greenspace during the pandemic. Nearly 40% of people said nature was more important than ever to their wellbeing. National media have also recognised that links with nature have been crucial for both physical and mental health. For some, lockdown meant getting to know your local patch, gaining an intimate knowledge of all that nature offers. The spring of 2020 was exceptional. In The Consolation of Nature: Spring in the Time of Coronavirus (Hodder Studio) one of the authors claims that it was the loveliest spring in living memory. This book brings together the experiences of three well-known nature writers as they explored their particular local patches in southern England. It is a glorious account of spring, in which exhilaration abounds. Another book that captures the spirit of our time is A Song of Gladness (Two Hoots) by Michael Morpurgo and Emily Gravett. Subtitled ‘A story of hope for us and our planet’ this is a children’s story that shows us the beauty of nature and what is at stake.

In Bath some local communities have been going further to encourage nature and make it more accessible. A local group has leased Lyncombe Hill Fields from the city council to do precisely that. Paths have been laid, trees planted, benches constructed, bird boxes erected and this nature area is taking on a new life. Local communities can make changes happen.

If you are stimulated to learn more about nature in Bath I would encourage you to join the Bath Natural History Society. We should be delighted to welcome new members.

David Goode is president of Bath Natural History Society, past president of the Institute of Ecology, and before coming to live in Bath was head of environment for the Greater London Authority. He is the author of the highly acclaimed Nature in Towns and Cities (Harper Collins).

Listen to the dawn chorus: bathnats.org.uk/international-dawn-chorus-day-3-may-2020