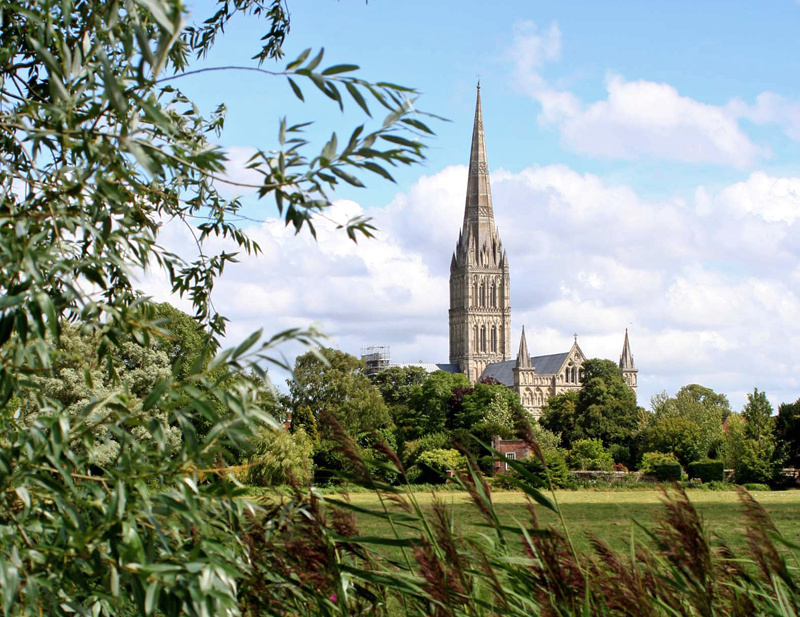 Back to Medieval England: A walk around Salisbury

Salisbury, originally known as Sarum, is a city that started somewhere else – two miles to the north, to be precise, within the ramparts of an iron-age hillfort, where the Normans built both castle and cathedral. Then, in 1220, the foundation stone of a new cathedral was laid, down by the banks of the River Avon. It was to become one of the grandest in Christendom, and the city that grew up around it was one of the most important in medieval England.

Almost 800 years on, the cathedral, set within the largest close in England, remains one of the most immediately recognisable buildings in the country, while the city around it holds ample evidence of its medieval origins.

Equally remarkable is its setting, with water meadows creating an almost uninterrupted green artery through the city, so that the view of the cathedral from the south, uncluttered by buildings, is the same as it was when Constable painted it in the 1830s.

As well as exploring this green artery, and visiting Old Sarum, this walk visits part of the old city, including the cathedral close. As the easiest way to get to Salisbury is by train, it starts at the station.

After turning left out of the station, cross a zebra crossing by the Cat Tavern and carry on in the same direction. After 300m, you come to the General Infirmary, designed by John Wood the Younger, whose foundation stone was laid, like that of the Royal Crescent, in 1767.

After passing the clock tower, whose base once formed part of the old jail, cross a zebra crossing and continue over a footbridge to the Town Mill (SU142299). Go through an archway and carry on alongside the mill leat.

Carry on past the Boathouse pub, under the railway and the by-pass, and over a zebra crossing into Ashley Road Open Space. Stay on the left bank, and, after crossing another mill leat, follow the path alongside the river. Carry on along a boardwalk through the Avon Valley Nature Reserve, and, after it ends, bear left rather than going through the gate ahead. Continue through a kissing gate (KG) and bear right along a track between hedges. Follow this as it bears right and then left, but, when you come to a tarmac path, bear right along it. A sarsen commemorating the parliament tree

After crossing the river, carry on along a lane and turn left by a thatched cottage at the end. When the pavement ends, by the Prebendal House, cross and turn up a lane.

After 350m, turn right up a broad path (SU133327). After another 100m, turn left through a gate and follow a track up to another gate. This leads onto Old Sarum’s outer rampart, from which a narrow causeway leads across a ditch and through the inner rampart to emerge on a broad expanse of turf with the foundations of the cathedral to the left and the remains of the castle ahead.

After touring the site, follow the road leading out through the ramparts. When it swings left, go through a gate on the right and follow a path straight on through another gate. Just before a busy road, turn right along a path for Stratford Sub Castle. Carry on with the hedge on your right, but, just before the end of the field, bear left, go down a few steps and turn right along an old rough track known as the Portway (SU139323). After 250m, you pass a sarsen on the right commemorating the parliament tree that stood nearby.

Continue along a lane, and, at the road, carry on in the same direction. When the road swings right, bear left along a path. After 200m, bear right along a rough track which soon curves left to follow the river.

After 750m, when you come to a bridge, cross it and turn left alongside the river. After going under the by-pass, turn left across a bridge which once carried the railway over Castle Street, but was moved here in 1898. At the end of Nelson Road, turn right under the new bridge along Castle Street. Although not one of Salisbury’s more celebrated streets, it contains such gems as Milford Hall, Hussey’s Almshouses, the 16th century George and Dragon and some 15th century cottages.

Keep to the right as you enter the Market Place and carry on through an alley to St Thomas’s church, famous for a mural of the Last Judgement dating from 1475.

Carry on past the church and turn left along Silver Street. Continue past the Poultry Cross along Butcher Row. At the end, turn right and continue along Catherine Street and St John’s Street, before turning right, opposite the Chapter House pub, through St Anne’s Gate, which dates from 1331. After passing a sundial from 1749, carry on along North Walk into the Cathedral Close. A view from the site of Old Sarum

This contains one of the finest collections of buildings in the country. No less than 123 structures in the Close are listed – 21 of them Grade I – making a circuit of it one of the most architecturally rewarding walks in the country. After walking along the north side, bear left and, after passing Salisbury Museum, bear left again. At the end, bear right along a path, before turning left through the south gate. At the end, turn right by De Vaux House, which started life as a college in 1261.

St Nicholas’s Hospital, which you pass on the left, is even older. After crossing two bridges, turn right along Harnham Road, past the 16th century Rose & Crown, and turn right at the main road.

After 600m, turn right along Lower Street (SU135291). After 80m, turn left into the church hall car park and follow the path to Harnham church, founded in 1115. Go through a gate at the end of the churchyard, cross the road and head along a lane to the left of a thatched cottage. Keep going past the oldest surviving watermill in Wiltshire for the highlight of the walk – the sudden, uninterrupted view of the cathedral across water meadows.

Length of walk: 7½ miles
Approximate time: 3½ – 4 hours
Map: OS Explorer 130
Getting there: there an hourly train from Bath Spa to Salisbury
Entrance charges: there is a charge for entry to the castle site at Old Sarum, but free access to the rest of the site, visit: english-heritage.org.uk