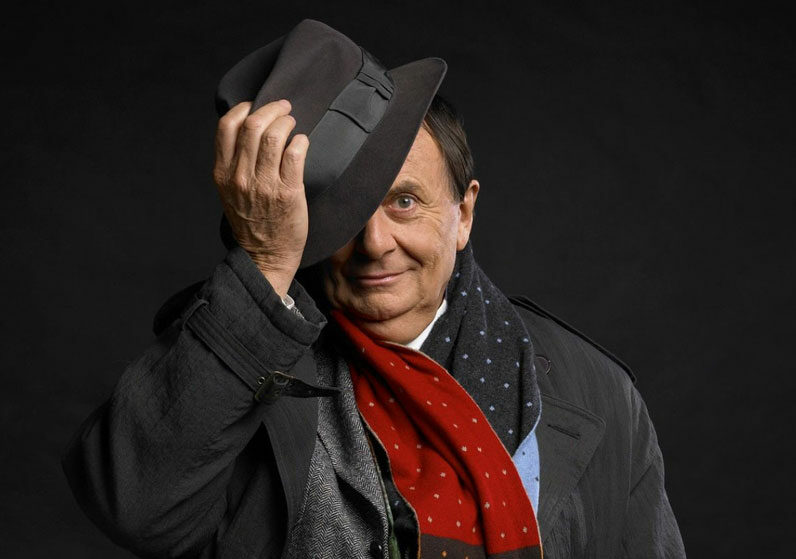 Barry Humphries – whose alter ego is the sparkling diva Dame Edna Everage – is coming to Bath this month. Emma Clegg discovers some interesting facts while chatting to the comic performer: his father was born in Bath, he wanted to be a painter, and (unexpectedly) how her own name is the 757th most popular in the UK.

My name is actually Emma Haystack, Barry Humphries tells me – this is, he explains, because he’s looked it up and my surname means ‘small haystack’ in Old Norse. He also says that when he comes to Bath for two nights from 17–18 April for his Man Behind the Mask tour he will be returning to the land of his forefathers. These two comments were an unexpected part of my interview with this celebrated comic performer, best known for his satirical alter egos of ‘refined’, acid-tongued Melbourne housewife Dame Edna Everage and inebriated, uncouth cultural attaché Sir Les Patterson.

“My paternal grandfather came from Lancashire – he always spoke with a strong Lancashire accent – and then he settled in Bath as a builder, and my father was later born there. But then things were tough, so the family went to Australia because we’d had the Gold Rush and Melbourne, my home town, was the richest city in the world. Apart from Buenos Aires.”

My head spinning with talk of the Gold Rush and Bath (not an association I’ve made before), I ask Barry why he has decided to take on this tour, after his 2012 announcement that he was retiring from show business. “I haven’t ever officially retired,” exclaims Barry. “All I’ve done is around three farewell tours. I kept calling the shows ‘farewell tours’ because that sells more tickets, but it tends to wear off a bit if I keep on saying ‘farewell’. So this is a kind of ­­­­‘hello’ tour.”

Barry – atypically for an interviewee – is intent on talking about me, in particular my surname – and he’s done some careful research. I discover that the name ‘Clegg’ is the 757th most popular name in England, but mostly in Rochdale, which is, Barry asserts triumphantly, “clogged with Cleggs.” Guiding him back to the topic of himself, he admits he’s missed being on stage: “Although I never took acting terribly seriously it’s taken over rather – it’s in my blood, and having been absent from the stage for two and a half years I’m so keen to get back again.”

There is an air of secrecy on what the tour will bring (it’s called Man Behind the Mask, after all), but it’s clear that Barry will be the star. “This new show is really an autobiographical show. You will of course hear much about the origins of Edna and Les Patterson, and perhaps about me, because I’ve decided, Emma, that I am a rather interesting person. I never really thought about myself, but I think the audience will quite enjoy some scorching revelations. And it will be encouraging, probably, to the odd senior citizen that you can still leap around on the stage if you are an octogenarian.”

I establish that there may be some surprise appearances from his other characters such as Dame Edna and Sir Les. “I sincerely hope they don’t interrupt the show,” comments Barry. “But I think we’ll see some excerpts of their lesser-known work.”

Guiding Barry back from his ruminations about whether I’d thought of ghost-writing – because I have a ‘knack’ with words, and “so many people are totally ignorant and unable to put two words together” – I enquire about whether he feels more British than Australian, having lived in the UK for over 60 years.

Edna takes over and honestly it’s automatic. I don’t even have to think my way into it. It is as though I am inhabited by this woman who represents all that I couldn’t stand about Australia

“No,” he says. “I used to go back to Australia in pre-Covid days twice a year so I never really felt I’d left. At the same time I never joined the Australians in London gang. And even friends of mine like Germaine Greer or Clive James, I never saw much of because we were all so busy carving out a career for ourselves.

“But as a matter of fact when I was a boy in Melbourne I always felt a bit foreign. My mother used to say, ‘Barry we don’t know where you came from.’ Now that sounds funny to us, but then it was scary because it convinced me that I was some kind of alien.”

Barry is talking here about his artistic sensibilities. His Wikipedia entry – which I explain (to his surprise) is extensive, requiring much scrolling down – says, “Humphries was sent to Melbourne Grammar School where he spurned sport, detested mathematics, shirked cadets ‘on the basis of conscientious objection’ and matriculated with brilliant results in English and Art.”

“Artistic didn’t mean then what it means now,” Barry explains. “For a while it implied effeminacy and then it meant interested in music and poetry, which young Australians in the late 1930s and 1940s weren’t meant to be. We were meant to be sporty types. And as a matter of fact, Emma, I attribute my very long life to total abstinence from athletic activity. It’s a waste of time really. And also an invitation to injury.”

At the University of Melbourne, where Barry studied Law, Philosophy and Fine Arts, he dabbled in theatre, but it was not his focus. “I was in university shows and I was somewhat distracted from my studies by the dramatic society, but I never thought it was my future. I was more interested in being a painter.”

Originally conceived in 1956, Dame Edna Everage – described by journalist Caroline Overington as “A perfect parody of a modern, vainglorious celebrity with a rampant ego and a strong aversion to the audience” – has become a long-enduring comic personality. I wonder if the transition from Barry to Dame Edna is an easy one. “You don’t prepare,” says Barry. “All you do is acquire the appearance, the glasses, the mauve hair, and Edna visits you. She takes over and honestly it’s automatic. I don’t even have to think my way into it. It is as though I am inhabited by this woman who represents all that I couldn’t stand about Australia. But one has a sneaking affection for her, which takes the curse off the character. So she is not just a woman who insults you, because she does it in a caring way.

Barry is categoric about one thing on the content of his tour. “Those who have enjoyed John Cleese’s one-man shows will be disappointed because I make no mention of my alimony, so it might disappoint a lot of people. I’m not referring in any embittered terms to any of my former wives. I hope that won’t upset people. I don’t think it’s fair to an audience of hardworking people to hear about the billions of dollars some comics have to give their ex-wives. It’s not endearing, is it?”

Barry has three former wives, but since 1990 has been married to Elizabeth ‘Lizzie’ Spender, the daughter of British poet Sir Stephen Spender and concert pianist Natasha Spender. “I even married an English girl in the end. My wife Lizzie is very, very English,” he asserts proudly. Barry says he never felt in control of his own career: “My disadvantage was that I never had much ambition. So I didn’t make much happen; things happened to me.” However he has another aspiration: “I’ve lived in London since 1960 and I’ve just acquired British Citizenship. Now I am a British Citizen I am able to accept a knighthood. So we just hope that the right people read The Bath Magazine. The long wait is over, so get moving monarch!”

Barry Humphries: The Man Behind the Mask is at Theatre Royal Bath from 17–18 April; theatreroyal.org.uk