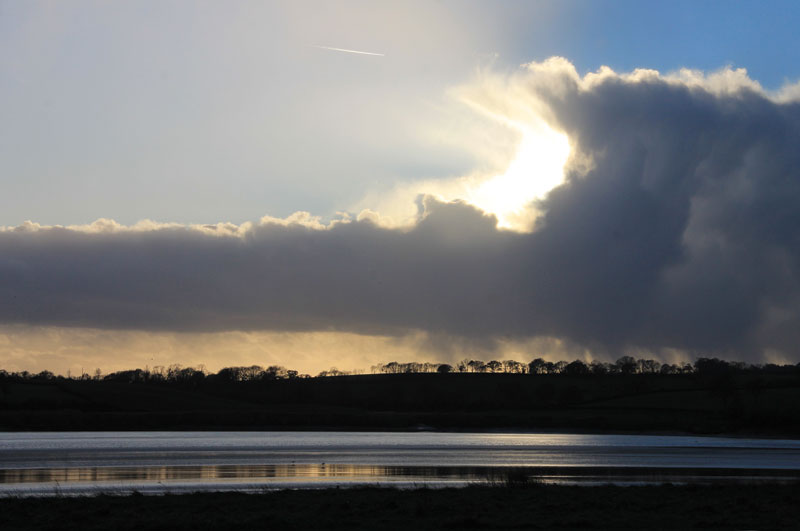 This month Andrew Swift explores a little-known corner of Gloucestershire about an hour’s drive north-west of Bath and experiences some astounding view of the silvery Severn.

The villages on the eastern shore of the Severn estuary have a character all their own, with ancient churches, manor farms, half-timbered cottages and resolutely traditional hostelries. Long, level lanes wind between moss-grown orchards, the skies are vast, the light ever-changing, and the swift, treacherous waters of the silvery Severn flow silently seawards.

All these villages have the feeling of remoteness, of lying close to where the land ends, but in none of them is that feeling more potent than in Arlingham, which sits in the arm of a broad meander, with the river on three sides, and only one road in or out.

Arlingham wasn’t always a dead end, though. For centuries, the river could be forded to Newnham on the western shore. So important was the crossing that the Romans built a road to it from the Fosse Way. It seems always to have been a risky business, though. In 1779, when Samuel Rudder wrote his New History of Gloucestershire, he described it as a “ford over which, at low water, wagons and people on horseback, of more resolution than prudence, sometimes pass. Many have lost their lives in the attempt.”

When a sandbank was swept away in 1802, however, making the crossing even more treacherous, a ferry was introduced and performed a useful service for almost 150 years. Unfortunately, it stopped running when the last ferryman died in 1948. Although there have been plans to revive it or even to build a bridge, for the moment at least this is one part of Gloucestershire you won’t pass through on the way to somewhere else. You have to make a special effort to get here, but Arlingham’s unique character makes the trip well worthwhile.

To get to Arlingham, you have to turn off the A38 at Fromebridge, not far from Junction 13 of the M5. After driving straight on through Frampton and Fretherne for nearly five miles you come to the Red Lion at the heart of Arlingham.

Carry on for another 100m, before pulling into a car park on the right (SO707110; GL2 7JN). Ahead, the road leads on towards the old river crossing, its wide verges indicating that for centuries it was a drove road, along which Welsh cattle were driven to market in London.

Instead of carrying on along the road, however, the walk starts by turning off it just beyond the car park to follow a restricted byway on the right. This is shown on old maps as Netting Lane, and, although it starts off reasonably enough, after passing through two gates it soon turns muddy. Carry straight on, with a drainage ditch – known locally as a rhyne – on your left, and after 750m, when you come to a T junction, turn left to follow another restricted byway sign (SO712115).

This is Warth Lane – ‘warth’ being a local word for a flat meadow by the river. Follow the lane as it swings left and then right past an old orchard, its trees hung with mistletoe. Arlingham was long famous for its cider, with two apple varieties – Arlingham Schoolboys and Arlingham Churchyards – being named after the village.

After bearing left and then right once more, the lane ends at a group of barns, where the going may turn mucky (SO710122). Once through the gateway, turn right and then left when you come to the end of the barns, before bearing right through a gate with a footpath waymark. Carry straight on for 125m and, after going through another gate, climb onto a levee for your first view of the Severn. Ahead is the spire of Westbury on Severn church, with Garden Cliff, famous for fossils and spectacularly stratified, to the right of it.

Turn left to follow the path along the levee. Although initially leading north-west, it soon follows the river to curve south-west. After rounding the bend, look out for two reed-choked ponds, created when soil was extracted to shore up the sea wall in 1984, and now a refuge for birds. The trains on the far shore are on the scenic line between Newport and Gloucester. The village they pass through without stopping is Newnham on Severn.

After a mile and a half you come to the Old Passage Inn, once the embarkation point for the ferry. To the right of its main entrance is a tall milestone, with no surviving inscription, thought to date from the 18th century and one of several which stood alongside the road to the ferry.

As you carry on along the sea wall, look across to see a small boatyard and harbour south of Newnham. This is Collow Pill, where there was once a large tannery and timber yard. Further along is the much larger Bullo Pill, originally the site of a shipyard, but from the early 19th century, when it was linked by tramway to mines and quarries in the Forest of Dean, a busy port shipping out up to 1,000 tons of coal and stone a day. Trade declined rapidly in the early 20th century, and in 1926 the dock was downgraded to a tidal basin.

Carry on as the river curves south-east, and, just before you reach the pylons, turn left through a kissing gate (SO705099) to follow a path alongside a rhyne. The path soon turns into a track and then into a lane. After it curves right and then left, you pass Westend Farm, with some well-preserved outbuildings. A little further along on the left, set well back from the lane, is Rectory Farm, dating from the 17th century. St Mary’s church beyond it is largely 14th-century and has some original stained glass, while the churchyard has a fine collection of ornate memorials.

Soon you reach the crossroads at the heart of the village, with the 17th-century Red Lion, now a community-owned pub, on the right, and the road back to the car park on the left.

More on the details of this and many more walks can be found in Andrew Swift’s Country Walks from Bath, published by Akeman Press; akemanpress.com.