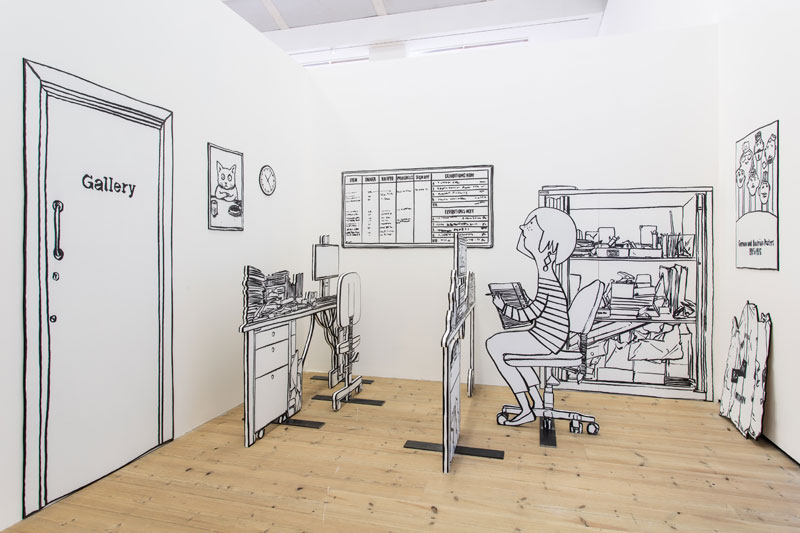 A sculpture is always a sculpture if you can walk round it, Emma Clegg decides, after talking to Mick Peter whose exhibition of illustrative sculptures with a strong Bath connection is arriving at the Holburne Museum this month. Not perhaps not what you’d expect at the Holburne – but it’s time to reset your expectations…

Duchamp’s Bicycle Wheel part of your cultural reference? Even if they are, galleries and museums do not always have such familiar iconic works, and therefore an abstract sculptural form in the foyer or grounds of a grand building does not always provide an easy engagement for visitors.

“There can be a threshold problem of going into galleries, which is perhaps the offputting thing – it can be rather austere, rather silent,” says Glasgow artist Mick Peter. “People have a certain set way of interacting with artwork in a gallery. With paintings you troop round the room clockwise and spend your allocated 30 seconds in front of each image. With a sculpture, you circle them, read the description, check round the back to see if you’ve missed anything. It’s very reverent and slightly comical.”

Peter’s work takes satirical aim at these preconceived notions, and from 14 January he is bringing his work to the Holburne Museum in an exhibition like no other seen there before. It is the first special commission of artwork at the Holburne, and part of their long-term commitment to contemporary art. Called Old Ghosts, the exhibition creates a narrative trail through the museum and its garden, while humorously critiquing the conventions of heritage sites. And what better place to do this than in Bath? Expect amusing references to our city’s glorious Roman and Georgian history.

Peter’s sculptural work largely consists of scaled-up drawings and environments which create the sense of walking into a model. In an installation earlier this year in Hospitalfield, the 19th-century Arts and Crafts house near Arbroath, Peter created three life-size scenes as part of an exhibition called Gerroff! (or User Feedback). One of these in the gardens shows two tall and one short totem-like sculptures, an absent-minded dog walker looking perplexed as he reflects on one of these, his dog (behind him) in the throes of going to the toilet adjacent to the second totem, and to complete the scene there is a woman with a Neighbourhood Watch tote bag using her phone to report the man for not picking up after his dog. It is a lighthearted, comical interconnected scene, and yet there is real resonance there. This is because we recognise the character types – the man trying to understand the abstract artwork and not necessarily succeeding, the woman intent on community action but oblivious to the sculpture, and the dog for whom the totem is simply a convenient lavatory.

What these pieces do so effectively is shatter the cultural superiority of the ‘artwork’ in the scene while at the same time having a real affection for the art historical styles they mimic. The illustrative look of the sculptures (challenging the accepted idea of sculpture because of their flatness) and the ever-present humour and social commentary invites visitors to stand amongst them, deconsecrating our ideas about what art should be and allowing us to engage with the pieces in a new way. The artist wants to reset the accepted framework of appreciating art history, enjoying its rich stories but not having to feel that it’s somehow exclusive.

Peter explains his approach: “I make playful installations that incorporate imagery influenced by illustration and commercial art. My sculptures are often enlarged drawings, used to animate the narrative of my exhibitions, which satirise the symbols of power and authority as well as art making itself.

“I love to imagine that people are going to have private moments with these objects. The sculptures are about people and ‘types’ as much as they are a gag about how public art is viewed.”

“I’ve always been fascinated by the different commercial enterprises that happen in museums and galleries and other institutions to help support running the building and I like to draw attention to these in my work. In the case of the Holburne, the building is often used as a film set, most recently for Netflix drama Bridgerton, and for weddings and receptions and I wanted to capture some of that complexity in the work.”

Peter studied at the Ruskin School of Fine Art in Oxford, where traditional figure drawing skills were encouraged, and later at the Glasgow School of Art, and his figure sculptures are fed heavily by his sketchbooks. These are bursting with drawings of figures and studies of people – taken from life, and also from sources such as emergency service fly-on-the-wall programmes and from the BBC’s Antiques Roadshow and its constantly reinvented visual library of eccentric characters.

Like the Hospitalfield project, there are three elements to the forthcoming exhibition in Bath. On the Holburne’s famous façade facing Great Pulteney Street, a hapless signwriter has failed to notice a mistake as he desperately tries to complete his task of refreshing the museum’s signage. Outside the gallery, there will be what appears to be an archaeological dig complete with a half-buried ‘Roman’ road. And inside there will be a set for a paint advert in period costume in what was once the ballroom, with the backdrop a drawn version of a Georgian room but with camera operators, runners, take-away coffees, and the other paraphernalia of a shoot.

“My characters come from observing and drawing and filling sketchbooks. They are often hybrids of different drawings – a head from here, some legs from there. I scale all the figures I produce up by ten, so the lines preserve the wonkiness of the original mark. It means you readily recognise it as a drawing even when it’s the same size as you. The economy of line is important because there are limits to the detail you can capture in a small sketchbook size drawing.”

Peter’s sculptures that are used in the interior are created with printed paper and board, while the material used for the sculptures outside is an acrylic composite and was recently developed for his commission at Hospitalfield. Peter explains, “The line work has been engraved into it and inlaid with black; it means the drawing is embedded in the surface a bit like the writing in a stick of rock.”

The signwriting figure on the Holburne’s upper façade will be visible from beyond the gallery grounds, no doubt drawing in intrigued passers-by who might not have planned a visit to the hallowed grounds of the gallery. “I think people are pretty capable when it comes to looking at artwork, maybe it’s just the means of looking at
it is the thing that’s less inclusive,” comments Peter, who clearly specialises in finding ways of changing these means.

Go and immerse yourself in his characterful sculptural tableaux in our heritage city when Old Ghosts opens at the Holburne on 14 January.

Featured image: To Me, To You, Baltic Centre for Contemporary Art, Gateshead, 2019