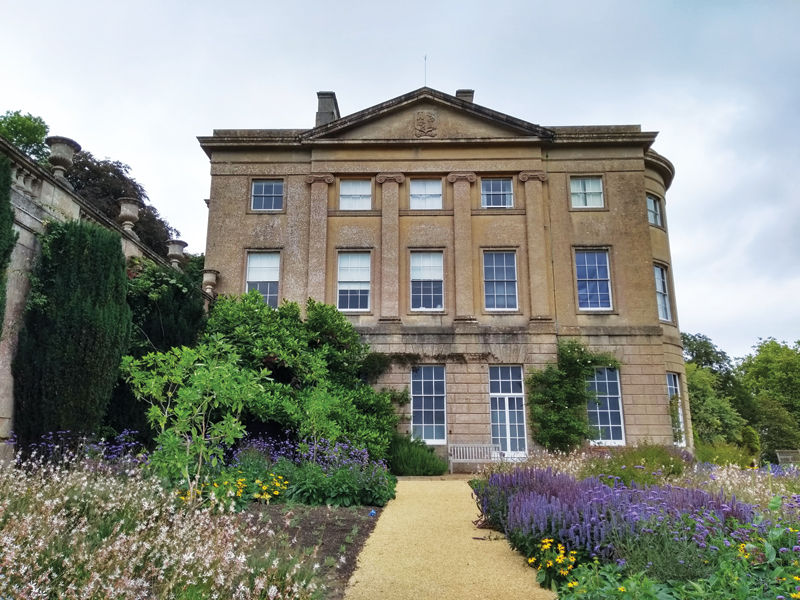 American Beauty: the new gardens at The American Museum and Gardens

With a natural amphitheatre, monumental sculptures, and swathes of flora from the United States, The American Museum’s new gardens offer a fresh perspective on horticulture from across the pond. Words by Jessica Hope

With its spectacular views over the Limpley Stoke Valley and tranquil setting, the newly named American Museum and Gardens has attracted floods of visitors since it first opened in 1961. As well as exhibiting a bountiful collection of remarkable folk art, quilts, maps and furnishings from American history, the museum also boasts beautiful gardens within the 30 acres surrounding the main house. Following an extensive six-year project, the museum has now completely transformed the gardens using plants and expert landscaping from the United States to create a green haven for visitors to explore.

It has for a long time been the initiative of the museum’s director, Richard Wendorf, to develop the gardens into an accessible space for all, linking its various gardens and attractions together, while celebrating the flora and fauna of the United States by bringing in native plants from across the Atlantic that visitors may never have seen.

Speaking about the gardens’ changes, Richard said: “As the only museum outside of the US dedicated to celebrating American culture, we’re constantly seeking new and inspiring ways to showcase American history. Thanks to the generosity of our friends in the UK and US, the New American Garden will extend the experience beyond the doors of our period rooms and galleries.”

With donations from the supporters of the museum, £2 million has been injected into the redesign of the gardens under the guidance of the Washington DC-based landscape architecture firm Oehme van Sweden, making this the company’s first European commission. 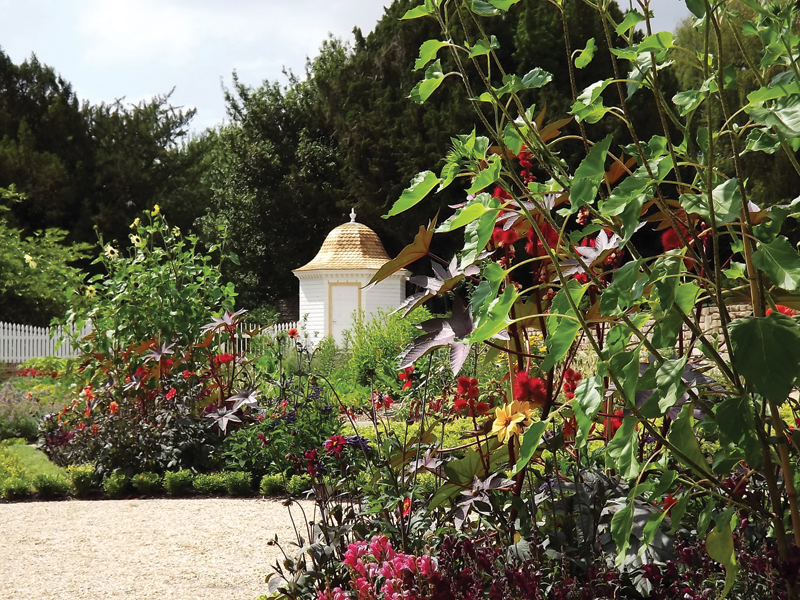 The rebuild seed house in the Mount Vernon Garden

Visitors will now arrive via the newly built pavilions in the gardens, meaning the incredible views over the rolling hills of the valley below will be the first thing that they will see after purchasing their tickets. While there were some disputes around the cutting down of trees to build the new ticket gates, these trees are currently being recycled and dried out to make new floor panelling for the pavilions, so everything has been creatively incorporated.

Inspired by the circular pathway around the gardens of the home of Thomas Jefferson, Founding Father and third President of the United States, in Monticello, Virginia, the museum has established its own Winding Way around the vicinity. The new path connects the gardens, arboretum, house, exhibition space and café with a wheelchair and buggy friendly path, encouraging visitors to see everything that the American Museum and Gardens has to offer.

After securing planning permission late last year, the museum has moved quickly to create Oehme van Sweden’s vision. Under the guidance of the museum’s gardening team, headed by Andrew Cannell, and with the help of local craftspeople and businesses, horticultural placement students, and even members of the museum’s office staff, The New American Garden beside the main house is now in full bloom after planting 16,000 native American plants in the spring. With large swathes of long grasses that dance in the wind, and the beautiful hues of the purple, green and yellow flowers and shrubs, this garden has been designed in a free-form style that was made famous by the designer’s founders Wolfgang Oehme and James van Sweden. This also means that the grounds now possess the largest collection of American horticultural features in the UK.

“The New American Garden is now in full bloom after planting 16,000 native American plants in the spring”

Owing to Claverton’s steep terrain, part of the lawn has been levelled so that marquees can be erected, allowing the museum more opportunities to host events and weddings in such a picturesque location. Just below the house, an impressive natural amphitheatre has been carved into the lawn, creating more space for open-air theatre, concerts, re-enactments and events, as well as a great place where adventurous children will enjoy the challenge of climbing up the grassy steps, or where visitors can soak up the summer sunshine on the lawn. There’s also an American Rose Garden being planted that will be abuzz with bees in the future.

Also featuring around the gardens are six larger-than-life bust sculptures of key figures from American history, including President Abraham Lincoln and Founding Father Alexander Hamilton, created by internationally renowned British sculptor Angela Conner. As a more personal nod to the museum, there is a sculpture of Winston Churchill is also on show, who made his first political speech at the site of the museum in 1897, aged 23, at a summer fête for the Primrose League. To coincide with the launch of the gardens, there will be an additional exhibition, titled Face to Face with Angela Conner, of 14 portrait busts reflecting the museum’s Anglo-American connections, on show until 28 October. 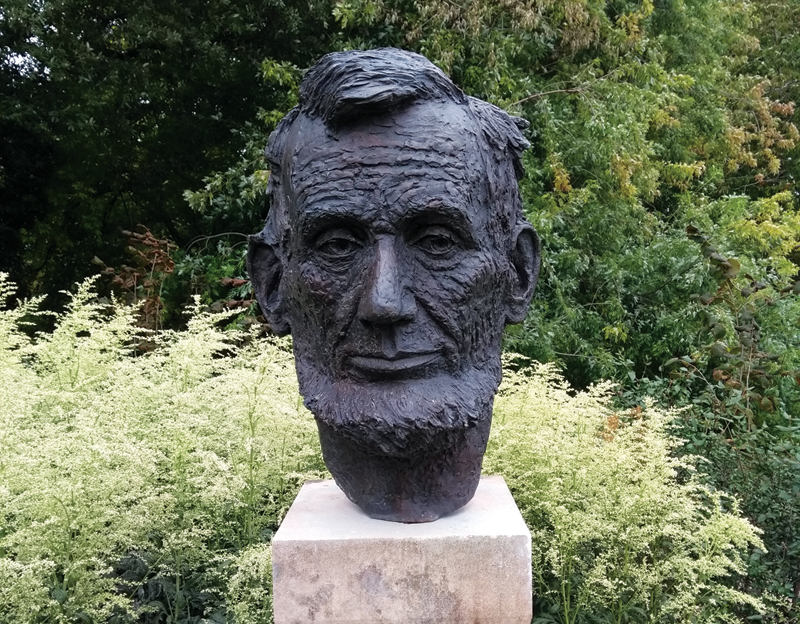 Since the museum first opened, its Mount Vernon Garden – a replica of George Washington’s 18th-century colonial garden at the Mount Vernon estate in Virginia – has always been a popular attraction for visitors. Following new research into how Washington’s garden looked during his lifetime, head gardener Andrew Cannell has implemented extensive changes to the garden. The seed house has been completely rebuilt by craftsman Matt Cannell with a beautiful cedar shingle roof made to look like stone using a process Washington termed ‘rustication’, and bright Helianthus ‘Lemon Queen’, delicate Linum perenne, and pretty pink Physostegia virginiana ‘Vivid’, among others, have been planted to add waves of colour and texture to the garden.

A recent discovery found that Washington grew agricultural crops in his garden, and therefore Andrew has plans to grow 18th-century varieties of beans, peas, asparagus and potatoes, which can then be used for dishes served in the museum’s café. Currently the garden is full of colour as 140 Jack-o-Lantern pumpkins are growing plump just in time for Halloween.

To top it off, the Parterre in Mount Vernon now features 2,100 Buxus microphylla ‘Herrenhausen’ plants laid out as an enormous fleur-de-lis, paying homage to the Marquis de Lafayette, a French aristocrat and military officer who led American troops in the Continental Army during the War of Independence, and who became a lifelong friend of Washington.

In addition, the new pathways between the colonial gardens and the contemporary style of Oehme van Sweden’s New American Garden allow visitors to move through different ages of garden design and style with ease. With 50,000 bulbs still to be planted this autumn, and talks of more accessible paths and a natural play area, the American Museum and Gardens is stepping into a new floral era, which is a delight to the senses.

The American Museum and Gardens, Claverton Manor, Bath is open Tuesday to Sunday, 10am–5pm. Face to Face with Angela Conner is on until 28 October; americanmuseum.org

Top events at The American Museum and Gardens

The Sir Winston Churchill Memorial lecture: Paris 1919, and the big two
17 October, 7–9pm
This talk will explore the relationship between Lloyd George and Woodrow Wilson, and discover how they shaped Europe and the modern world. £15.

Week of the Dead Fiesta: family fun trail
20–28 October, 10am–5pm
Celebrate the Day of the Dead all week, and journey around the gardens on this fun family trail. £2.50 per trail includes prize, normal admission applies.

Day of the Dead ball
27 October, 7.30–10.30pm
Señores, time to don your skulls and sombreros to celebrate the Day of the Dead at this Mexican inspired evening. There will be cocktails from The Abbey Hotel, plus music by Mariachi Tequila, and JC Jones and the Lake City Coolers. 18+, £20.

Featured image: A side view of the main house from The New American Garden