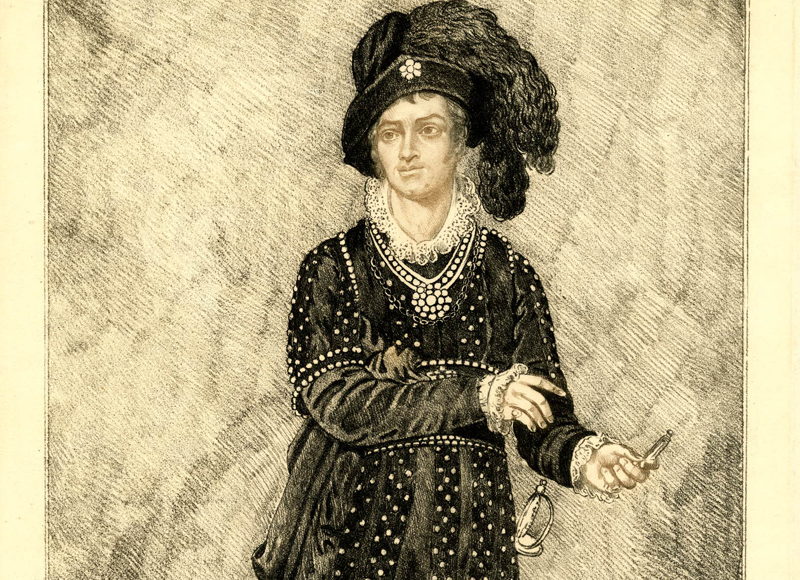 Historian Catherine Pitt tells the story of a man considered to be the worst actor in history, yet Bath audiences queued to see him perform

Bath, 1808 – genteel, sedate, elegant. Quietly the social season began unhindered, the glorious colour and buzz of the Beau Nash years a faded memory. Into this calm stepped an exotic character – the self-styled Amateur of Fashion, a man who was soon to be considered “the worst actor in English theatrical History”. Ladies and Gentleman, allow me to introduce to you – Robert ‘Romeo’ Coates.

Born in 1772 in Antigua, the only surviving child of plantation owners, Coates was schooled in England but returned to the West Indies after his parents refused to allow him to pursue a military career. When he wasn’t travelling, Coates would dabble in amateur dramatics. After his father’s death in 1807, Robert rapidly headed for England, first to London and then to Bath.

When Coates appeared on the peaceful city streets in 1808, few had seen his like before. Even in the period of Regency dandyism his appearance raised more than a few eyebrows. He was wont to wear vast furs in all weathers even during the day, and at the height of summer. In the evenings he would appear in the Pump Room and Assembly Rooms resplendent in a sky blue coat, yellow breeches, a multi-coloured cravat and a feathered hat.

If this wasn’t enough, Coates embellished every accoutrement of his attire – from his shirt buttons to his garter and shoe buckles, with hundreds of diamonds. Even his walking cane was topped with a vast sparkling jewel. He was, as one observer noted, surrounded by a “halo of rainbow-changing colours like those of the Antiguan moonlight” and almost immediately gained the moniker of ‘Diamond’ Coates.

To add to his outlandish image, Coates chose to travel in a carriage of his own design. This two wheeled chariot, known as a curricle, was shaped like a shell or kettle drum, and was pulled by two white horses. Atop the curricle was Coates’ mascot and motto – a crowing fighting cockerel, wings outstretched, and underneath the boast: “Whilst I live I’ll Crow”.

Despite his noticeable presence in Bath, few knew who he was or where he was from; all they knew was that he must be a man of wealth to indulge in such eccentricities. There are conflicting views as to where exactly he lodged in Bath, but what is certain is that he could be found, daily, enjoying breakfast and lunch at York House on George Street, a large coaching inn (and still a hotel today). It was here that, according to Pryse Gordon, a man who takes the claim (or blame) for introducing Coates to the Bath stage, he approached Coates when overhearing him rehearsing passages from Shakespeare. Apparently correcting Coates on a line, he was met with the words, “Aye, that is the reading I know . . . but I think I have improved upon it.” The Gay Lothario on stage – © Trustees of the British Museum

On further enquiry Gordon discovered Coates’ passion for Shakespeare and for amateur dramatics, and currying favour with this wealthy eccentric, Gordon offered to introduce Coates to the manager of the Theatre Royal, William Wyatt Dimond. Coates declared that he was “ready and willing to play Romeo to a Bath audience.”

Dimond was unwilling to risk the theatre’s reputation on an unknown, but much reassurance from Gordon that seats would be filled (Gordon had persuaded a number of his friends to purchase theatre boxes prior to the performance) and probably some monetary reassurance from Coates, Dimond agreed to a date. Playbills were plastered throughout the city announcing that on 8 February 1809 a new production of Romeo and Juliet was opening and that the male lead, Romeo, was to be played by “an amateur actor from the fashionable world”.

As word spread of Coates’ acting debut, seats began to fill up fast. On the evening of the production the Theatre Royal was packed with curious Bathonians, with many more turned away at the door. Inside the anticipation was palpable. Bejewelled necks craned to the stage and excited murmurings were heard in the packed house.

On Coates’ entrance the audience were at first dumbfounded at the vision stood before them, described by an observer as “one of the most grotesque spectacles ever witnessed upon the stage”. Romeo wore “a spangled coat of sky blue silk, crimson pantaloons,” the usual diamond additions; plus a huge baroque wig. Balanced on top of this was a white trimmed hat with plumes of ostrich feathers. Coates took a nervous bobbing bow, grinning away, and the audience burst into peals of laughter and roars of applause in equal measure.

Unfazed Coates proceeded, though it was like no version of Shakespeare’s play ever seen before or since. Coates had a tendency to forget his lines, add in his own where he thought they needed improving, and would alternately whisper sections to just one box in the theatre. During the famous balcony scene, Coates turned away from Juliet, pulled out his snuff box and proceeded to take a pinch. As the public roared their approval he took this as a sign and ended up offering it to a number of ladies and gentlemen in the audience.

As if that wasn’t enough to amuse the Bath audience, Coates’ costume was so tight, it made him move about the stage in an awkward and what must have been highly amusing gait. Half way through the play, during the rendition of an impassioned speech, the seams at the seat of his red breeches could take no more and burst open, revealing a “quantity of white linen sufficient to make a Bourbon flag!”

“Convulsed with laughter a number of members of the audience shouted out “Die Again, Romeo” and happily Coates obliged, not once but twice more”

On appearing at the tomb of Juliet, crowbar in his hand, the audience thought there couldn’t be more to this tragedy turned farce, but before proceeding with his death scene, Coates took out a silk handkerchief, laid it on the boards, put his hat down to act as a pillow and then went through a most lengthy and, apparently from his grimaces and groans, agonising ‘death’ before carefully laying himself out on stage.

Convulsed with laughter a number of members of the audience shouted out “Die Again, Romeo” and happily Coates obliged, not once but twice more. He was about to attempt a third encore when Juliet appeared from the wings and stopped him. Dimond, unsure on what to do at this juncture, and fearing retribution from the public, hastily dropped the curtain bringing the play, finally, to an end. Meanwhile on stage Coates ran around, hanging off boxes, shouting “Haven’t I done well?”– so Robert ‘Romeo’ Coates was born.

It seems that the jeers and heckles that Coates received made little impact on him – in fact he could give back as good as he got and thought nothing of turning to the offending heckler and giving them a piece of his mind. He was positively buoyed by what he considered his success in Bath, so much so that he decided to tour his production of Romeo and Juliet around the country, including playing the Haymarket Theatre in London, as well as in Brighton and Stratford-upon-Avon.

Although a subject of mockery and satirisation around the country, Coates still considered himself just an amateur actor and did not take a wage. In fact he probably had to pay actors and actresses to appear alongside him. His reputation preceded him so theatres were packed. Any profits Coates would request went to charity.

By 1816 Coates decided to forgo the stage, and in December he headed to the city, and theatre where it had all began, for the final act. Over three days in Bath he decided to perform another of his favourite plays, The West Indian, but for the final public performance Coates went full circle and chose Romeo and Juliet.

It was said by audience members who had seen him seven years previously that he was much improved but by how much is not implied. As before, Coates was jeered, but this time he didn’t ignore the jibes; but paused and declared that people could request their money back if they were not happy with his performance, but that his intention was that the money from this play, and his performance the following day, were to go to the local Pierrepont Street Charity. Shamed into silence, a more reverent crowd allowed Coates to continue.

After 1816 he would do the occasional private charitable performance, but it was the last the public would see of ‘Romeo’ Coates. Dogged by debt collectors during the financial troubles of the 1830s, Coates took refuge in Boulogne for a few years where he was often spotted in his furs.

His death, in February 1848, was as bizarre as his life had been – he was crushed between two carriages in London’s Covent Garden after a night at the Opera. Alas, Poor Romeo!