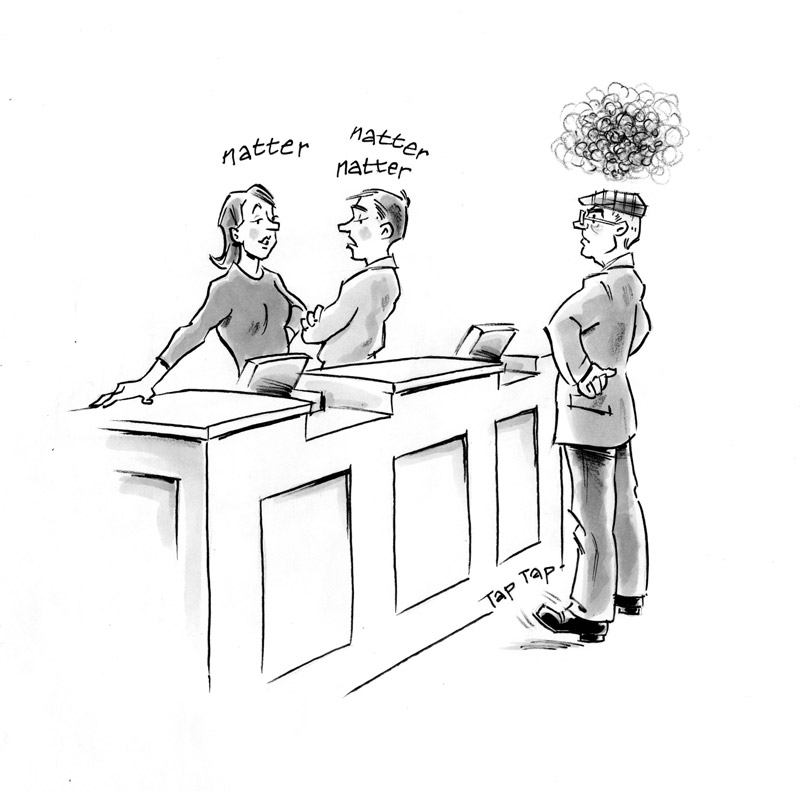 There’s just enough room on my tabletop, as I sit in the window of a café in Northumberland Place, to rest my cup of black Italian coffee and set down my iPad. Then it’s time to take a deep breath and muscle down to the challenge of a blank page. Actually, I don’t have to go far in search of this month’s inspiration. These are tough economic times on the high street and that’s maybe why – from large department stores to bookshops and banks – I am seeing fewer people behind the counter. It’s a commercial world of shrinking ‘can l help you’s and ‘thank you – have a nice day’s and a growing one of serving yourself.

The shopping experience is under siege. Supermarkets started the ball rolling – it still amuses me that the person who would normally have taken your money is still needed to supervise the self-serve stations as people and their real life practical demands continue to confuse the machinery. It’s self-serve at the chemist and the bank. You can check yourself out of a well-known stationers, and they’ve even got a self-serve facility at the post office upstairs. Bath has its first completely self-service garage too.

Now I know the commercial arguments trotted out in favour. It cuts costs, and I am sure those that operate the system would say it speeds up service, but it strikes me that we’re gradually drifting away from direct human contact. The high street’s going to have to re-invent itself to survive and l think we’ve reached a stage where good customer service would actually be a gimmick worth cultivating.

I recently went to a counter till in a Milsom Street shop where the man who served me continued his conversation with a fellow worker while serving me. I didn’t even get eye contact or a ‘thank you’ when I left with my purchase. This is not good enough. Contrast that with a card shop in which I was looking for an anniversary card for my partner. “Can l help?”, said the smiling lady behind the counter, who continued to chat while I scanned the shelves. The conversation turned to how long we had been together and how we met.

She was so smitten by the romantic tale I told that I was given the card. “I am allowed,” she said, “to make a daily gift of a purchase and you’re the customer who has charmed me enough to qualify.” That made a big impression on me. It happened last November and I can still remember it clearly. I would go back there. Not hoping for a freebie, but knowing I can count on good and friendly service.

Of course, there’s a counter argument to all of this. Pun intended. So many of us sit at home and let the shop come to us – whether it’s a supermarket delivery or a box of goodies ordered from the world’s largest online retailer. Maybe we just don’t deserve good service any more. Just a man at the door with a box from a van parked nearby – usually badly – with its engine running.

Ok, I am another ‘back in the day’ man moaning about how fast the world is changing. Though I must point out my ‘musings’ are all being created and recorded on an electronic pad.

When I was a boy living in a small village, I would be sent out to get fresh bread from the bakery, steak from the butchers and I carried my grandmother’s pudding bowl to be filled with ice cream from the sweet shop that churned its own delicious brand. A trip to the local grocery store is remembered for selecting biscuits loose from a tin, while bacon rashers piled up in front of your eyes from a hand-operated slicer.

I fear that future generations may run the risk of slipping completely into an electronic reality where the only human contact is made through a cell phone or computer. Where knowledge and experience stops being extracted from the real world around them. Shopping is a communal activity where we interact with our fellow humans. A public space in which news and opinions would be shared. In such an environment I now share mine…