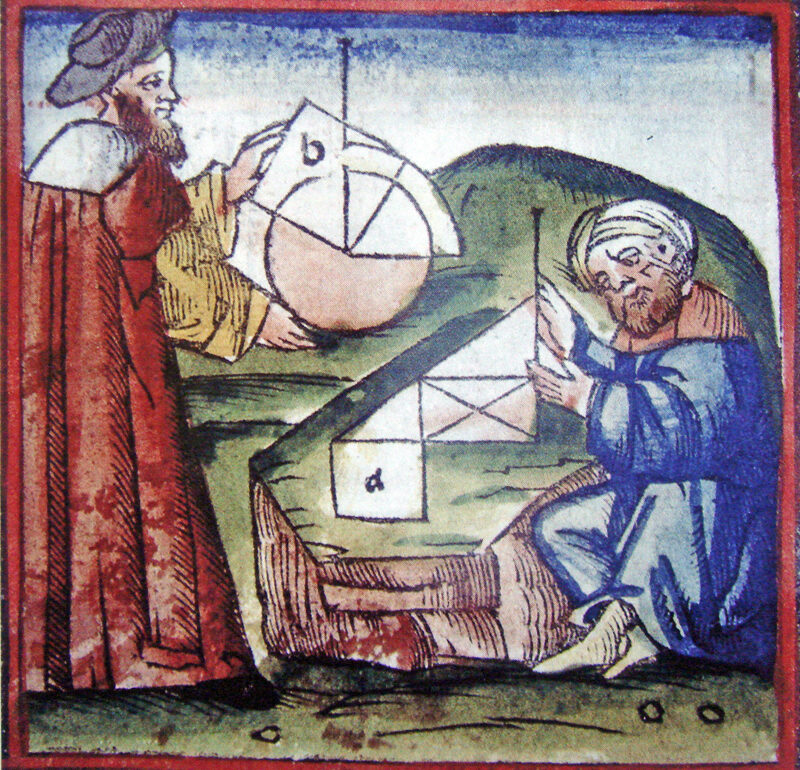 You might not yet know his name, but the intellectual and scientific accomplishments of Adelard of Bath make him one of our city’s great citizens. Ruby Bosanquet investigates the history and legacy of the man known as the first English scientist

Jane Austen, John Wood the elder and the Wife of Bath are just a few of the names associated with great Bathonians. But there is a new (and much older) contender, the mathematician and scientist Adelard of Bath. Regarded as the first English scientist and one of the great minds of the Middle Ages, Adelard was born in Bath in 1080 and died in the city after 1152.

You’ll be forgiven for not having heard of Adelard – while his work was highly significant in the development of modern science and there are extensive records of his writing, little is known about Adelard himself. It is through the diligent research of writer Louise Cochrane, who wrote Adelard of Bath; the First English Scientist, that light has been spread on this incredible Bathonian. The Bath Royal Literary and Scientific Institution (BRLSI) has recently republished Cochrane’s work and helped build more awareness of Adelard through a self-guided trail and a proposal for a new monument to reflect his achievements.

When Adelard was born, Bath was very different to the city we now know. It was a small community of just over a thousand people, most of whom lived in primitive dwellings. The Norman Conquest was still very recent (1066), and Bath was a site of destruction following a rebellion against William II. It was only when John of Tours, the Bishop of Wells, moved the seat of diocese from Wells to Bath in 1090, that the city met a turning point. John of Tours put plans in place to build a new cathedral, a school and a hospital. Unfortunately little remains of this great redevelopment, but it led to Bath becoming a centre of learning. As a student in Bath at this time, Adelard benefitted greatly from John of Tours’ influence. It was under John of Tours that the Benedictine monks in Bath became known for their scholarship, and ran a monastery where Adelard was educated.

Adelard’s family was closely connected to John of Tours and once Adelard had finished his education in Bath he was sent to Tours in France, where the Bishop received his own education. It was after this that Adelard published his first piece of work De eodem et diverso (‘On Sameness and Diversity’). Here, Adelard explored the differences between Plato and Aristotle’s work on human existence before producing his own explanation to reconcile the two theories. Adelard’s work in De eodem et diverso was a highly advanced piece of writing, and demonstrates his capabilities from a young age.

Not content with his work in philosophy, Adelard wished to increase his knowledge and did so by travelling extensively in the Islamic world. While Europe was experiencing the Dark Ages, the Islamic world was having its Golden Age; a period of flourishing cultural, economic and scientific growth. It is through his travelling that Adelard made some of his most significant contributions to modern science. It allowed him to gain access to Arabic knowledge and lost texts that were no longer available in the Western world. There he led the way in translating important Arabic and Ancient Greek theory and mathematics into Latin, making them available to Western scholars.

One of Adelard’s most influential translations was Euclid’s Elements. This was written in Greek in 300 BC, and by the time Adelard discovered Euclid, the work had already been translated into Arabic and had had a substantial effect on Arabic mathematics. Still considered one of the most successful and influential textbooks ever written, Elements is a vast compendium of classical mathematical knowledge and without Adelard would not have been available to the Western audience. His translation brought the use of theorems and proof to develop mathematical arguments to the attention of Western scholars for the first time, and proved instrumental in the development of logic and modern science. Adelard’s introduction of Euclid to Western scholars led to an expansion in geometry knowledge and collided with the beginnings of medieval Gothic architecture, which was highly influenced by geometry.

Another significant discovery Adelard introduced to Europe was the astronomical tables of al-Khwarizmi, also known as the Zij. The complex collection of tables and detailed calculations is far from easy to understand so Adelard’s translation was a remarkable intellectual achievement. His translation of the Zij contributed substantially to Western scientific development, and was actively used until as late as the 19th century. The original Zij no longer exists, so Adelard’s translation remains incredibly important to understanding the development of astronomy.

Although much of Adelard’s fame historically derived from his translations, his own work is still highly advanced and significant. On his return to England, Adelard wrote Quaestiones naturales (“Questions on Natural Science”). Unlike De eodem et diverso, this was not a work of theology but a natural science. It marked a transition of Adelard’s work in philosophy in De eodem to the application of reason to scientific method. Here, Adelard argued for the use of the powers of reason and suggested the study of natural causes could be justified in its own right as separate from theology. This marked the first explicit assertion in the Middle Ages that faith does not exclude the existence of natural causes. Interestingly, Adelard looked at the difference between man and animal and argued that it is essential for humans to use the powers of reason they have been endowed with.

It was in this work that Adelard became a leading figure in the rationalisation movement of the 12th century, providing yet another step in the development of modern science. Together with William of Conches and Thierry and Chartres, Adelard precipitated a conceptual revolution a century before the new ideas became absorbed into those of Grosseteste, Roger Bacon and Albertus Magnus.
Despite his extensive travelling Adelard remained a proud Bathonian, mentioning the city in Quaestiones naturales. Once settled back in England, Adelard served both King Henry I and King Stephen, utilising the astronomical tables and astrological texts he had translated to cast royal horoscopes. He also served as a tutor for the future King Henry II.

Adelard’s achievements didn’t stop there; he was also an expert on falconry. His book De cura accipitrum (‘On the Care of Falcons’) highlights his noble connections and demonstrated his medical knowledge.

Adelard’s accomplishments are vast and varied, and it is this exceptional career that BRSLI plans to celebrate through the creation of a public monument. The Stellarum sculpture will be a giant dodecahedron, which will have a unique arrangement of mirrors inside, using the geometry of the dodecahedron to create the illusion of looking into an immersive, infinite universe. The external surface will be etched with an abstract Moorish tile pattern, a reminder of Adelard’s travels in the Islamic world. BRLSI is currently looking for a city centre site to host this unique sculpture, so everyone can enjoy the immersive experience and learn more about Adelard.

If you are interested to see the city through Adelard’s eyes, Walk With Adelard is available from the BRLSI reception and provides a self-guided tour of Medieval Bath.

Adelard of Bath; the First English Scientist, by Louise Cochrane, £13, is available from BRLSI. The Stellarum project needs to raise £40,000; to contribute visit the BRLSI local giving page at localgiving.org/appeal/stellarum