Acorn: Plants step up to the plate

Melissa Blease goes behind the menu of Acorn Vegetarian Kitchen to hear how owner Richard Buckley and chef Steven Yates put vegetables at the centre of their delicious, innovative dishes

For a tiny, narrow street North Parade Passage has more than its share of tasty titillations, from cream teas to cocktails, by way of cinder toffee, ham’n’cheese toasties, tagines, upmarket pub grub and a certain classic bun of historic origins, which can all be found in a few short yards. But there’s a distinctly contemporary aroma of innovation subtly wafting on the breeze around the second house on the lane.

Having worked for Bath’s legendary vegetarian cookery queen Rachel Demuth as head chef at her eponymous restaurant for many years, Richard Buckley bought the tiny little modern bistro from her in 2013, and embarked on rebranding, revitalising and gently reinventing a long-established Bath institution.

Five years on, and Richard and his team at Acorn Vegetarian Kitchen (which includes the fairly recent arrival of head chef Steven Yates, whose experience in the kitchens at the Bath Priory Hotel and Sienna, Dorchester, clearly shines through) have steadily built a sparkling reputation locally and nationally, aided and abetted by inclusions in The Good Food Guide and gongs including the Viva! award for Best Vegetarian and Vegan Restaurant in the UK. Despite such acclaim, Richard is refreshingly guileless when asked about why he’s so successful.

He says: “Describing what we do and why we do it is very simple. We turn plants into good food, served up in a lovely space in one of Bath’s oldest buildings.” Well yes, that’s what they do. But somehow his description doesn’t quite do justice to what’s on the menu here.

Richard and Steven’s continously changing seasonal selection offers an exciting wake-up call to the senses. On my most recent visit to Acorn I tucked into potato – surely the most prosaic of root vegetables – that had been smoked before being pureed into such sublimely silky submission that I swore I was eating a delicious, rich French Rambol Fume cheese. Now that’s what I call culinary alchemy. So come on, Richard – big yourself up?

“I can’t,” he insists. “We honestly do work to a really simple formula. Every dish much be original and delicious, and that’s it. We use top local ingredients and suppliers and cook with passion and intelligence – and what we do is accessible to everybody. 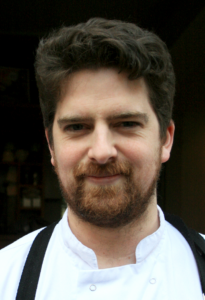 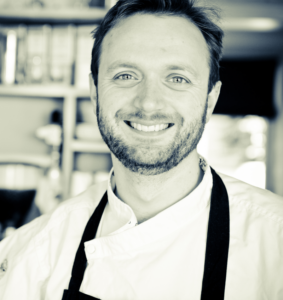 “While our dishes are designed to be conversation pieces that combine exciting techniques, novel ingredients and visually arresting presentation, we’re aware that food like ours can often be off-putting if it’s served in an environment that’s too precious. So we’ve created a relaxed dining room, and all our staff have a down-to-earth attitude towards what we do. We cook the way we do because it tastes better and is more interesting, not because we think we’re important. There’s a very fine line between clever, and being too clever just for the sake of it. Ultimately we have to always hold the thought that we’re simply cooking dinner for someone; first and foremost, that dinner has to be good to eat.”

Despite the recent rise in the popularity of meat-free dining, Richard has a similarly laidback approach to the notion of food fads and fashions.

“It’s good to be in touch with food trends to an extent, but ultimately I believe that you have to follow your own path in the kitchen because fashions change constantly, and it’s important to be part of the conversation rather than just following a diktat around whatever this week’s big thing might be. For the same reason, we consciously avoid having anything on the menu that could be taken as a signature dish.

“As soon as a dish becomes a popular ‘go to’ for our diners, we pull it.”

Isn’t that a little bit of an odd thing to do? “It may seem crazy, yes. But this is what keeps our menus interesting, and forces us to keep thinking. Really importantly, it also guides people towards trying the other exciting things we have on the menu. We might get complaints when we remove a popular dish, but if we didn’t do that we’d never move forward. And anyway, we could have filled the menu three times over with dishes we could have called signature at one point or the other.”

Having said that, Richard happily admits that Acorn’s legendary chocolate tart has been around, in various guises, for a long time (“only because we couldn’t better the recipe”). But generally, he and Steven work hard every day to move things along in exciting, dynamic ways. Right now, for example, Steven is obsessed about working with grains of all sorts (especially buckwheat and quinoas), while Richard is nuts about, well, nuts.

“There are people who complain that the only vegetarian option in a restaurant is a risotto or a nut roast, but when we include those on our menu we know that dish will outsell the other dishes three to one.”

“our dishes are designed to be conversation pieces that combine exciting techniques, novel ingredients and visually arresting presentation”

But don’t be fooled that an Acorn risotto will be anything like the standard veggie option on most menus. On the same evening that I experienced that rather surreal, pleasantly disorientating potato/cheese confusion, I also had a creamy pine nut and squash risotto that turned my erstwhile longstanding estrangement from Brussels sprouts (they were in the mix too, along with garlic and lemon zest) to do a 360° turnaround.

So if the duo were to embark on tucking into an Acorn menu right now, what would be their own favourites? “Steven’s new parsnip and hazelnut soup is rich and creamy, and a perfect foil for the lively wild garlic pesto and confit lemon that garnishes it – I don’t normally like soup, but love this one.” says Richard. “I’m also crazy about the new roast squash with smoked spelt – it’s so simple to look at, but we compress the squash in a cider marinade for twelve hours before roasting it to achieve the perfect flavour. ”

Richard shared a rather special piece of news: “I’ve finally got around to writing the big cookery book I’ve been asked to put together on so many occasions. Now that I’ve got Steven – such a superb, innovative, reliable chef – in the kitchen, I’ve got time to write. The book should be out next spring, published by Jacqui Small. It’s going to be a proper plant-based cookbook that goes beyond quinoa salads and avocado on toast and shows how to cook plants properly at home.”

And as the little A-board that sits in North Parade Passage says, ‘Plants Taste Better’ so plant yourself at a cosy corner table at Acorn, and discover just how much those three little words can really mean.