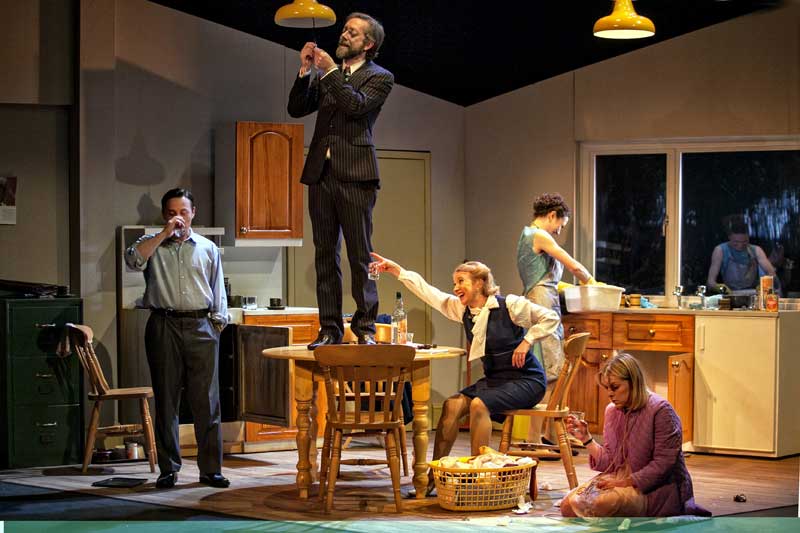 British theatre, 1972: David Hare’s Slags analysed radical feminism, Pinter’s Monologue explored age-related self-delusion and David Hare’s England’s Ireland offered an episodic look at the history of the British in Northern Ireland from several perspectives. Alan Ayckbourn, meanwhile, kept the start of his 1970s simple in a very clever way, maintaining and developing his already illustrious reputation as a playwright and director with Absurd Person Singular. This is another of his “wry observations of the British middle class” that he’d become an expert at articulating, at once putting a spotlight on, entertaining and condescending to the very people that he so cleverly (and at times, rather cruelly) stereotyped into neat categories along the lines of hapless husbands, desperate housewives and distinctly non-urbane suburbanites.

There is, of course, far more to Ayckbourn than the mere 70s TV sit-com territory that the previous sentence alludes to. But a premise revolving around the notion of “what do you get when you put an aspirational tradesman, a bank manager, an architect and their angst-ridden, downtrodden wives into three kitchens over three consecutive Christmas eves?” does tend to point us towards a punchline of time-capsule farce… and that’s exactly what we’re opening here.

In Absurd Person Singular, the kitchen is not only the heart of the home but the heart of the plot – and Simon Scullion’s smart, triple-cut set brings all three kitchens to fully effective life. In the first, we meet graceless, socially awkward but rather likeable Sidney Hopcroft (Paul Sandys) and his wired, compulsive-cleaner wife Jane (played to the highly strung max by Felicity Houlbrooke) as they’re preparing for the arrival of their guests, and from the off we’re bombarded with clues that suggest the first hosts are the lowest in the social pecking order: fitted cupboards, washing machine under the kitchen cabinet… and air freshener? All totally Non-U.

In Absurd Person Singular, the kitchen is not only the heart of the home but the heart of the plot – and Simon Scullion’s smart, triple-cut set brings all three kitchens to fully effective life.

And we sort of already know, before their guests arrive, that bank manager Ronald Brewster-Wright will be ineffectual and disinterested (good work, Graham O’Mara) and his wife Marion (Rosanna Miles) prone to over-hitting the gin, and that architect Geoffrey Jackson (John Dorney) might be a little bit pervy and his wife Eva (Helen Keeley) a woman on the verge of a nervous breakdown. How did we know who we were likely to meet before we met them? Because we’re on Ayckbourn territory, and few of his characters are psychological complication-free; so far, so very Abigail’s Party lite (although, interestingly, Abigail’s Party debuted five years after Absurd Person Singular).

As three years and three Christmas eve parties go by, everything changes for our three couples. Sidney rises through the career ranks, achieving moderate success as a contractor, Ronald’s bank starts to depend on Sidney’s deposits rather than Sidney depending on Ronald’s bank for loans, while Geoffrey’s grand designs have collapsed – literally – and he now desperately needs work from Sidney. As for the ladies: Marion descends into full-blown tragi-comic alcoholic mode, poor Eva spends pretty much the whole of Act 2 attempting to commit suicide (although nobody around her notices) and Jane – well, Jane’s sort of okay making out that everything’s okay, all the time, which clearly highlights the fact that nothing’s okay at all.

But an over-farcical final act almost undoes the good work done in the first two thirds of the drama and, despite Michael Cabot’s impeccable direction and a cast who work wonders with the limitations of a script that’s perhaps facing its ‘use by’ deadline, the humour threatens to become too heavy-handed, the characters too hyperreal and the whole premise way too undemanding, inoffensive and easily digestible to discomfit the audience in the manner that Ayckbourn likely intended almost five decades ago.