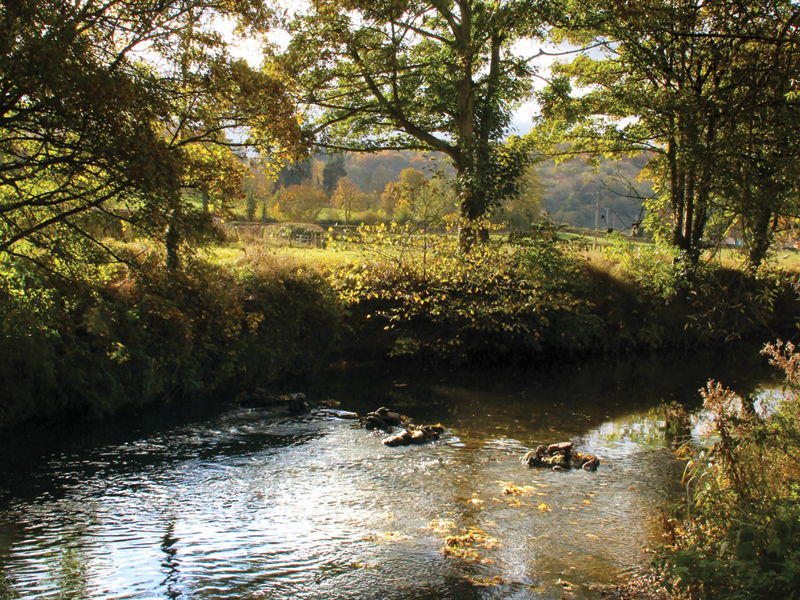 A walk of ancient haunts

A walk traces the shape of a landscape and embraces its history. Andrew Swift crosses the valleys of the rivers Frome and Avon and discovers Italianate gardens, a Carthusian friary and a canal aqueduct

Although only four and a half miles long, this walk through the valleys of the rivers Frome and Avon takes in Italianate gardens, an ancient manor house, the site of a Carthusian friary, woollen mills, a canal aqueduct and a line of pillboxes built in 1940 to protect Bristol in the event of enemy invasion. There is also a choice of tea gardens as well as two inns serving food all day. Best of all, you do not have to take the car, for the walk starts in Freshford, set amid narrow lanes with parking at a premium, but with an hourly train service to and from Bath. 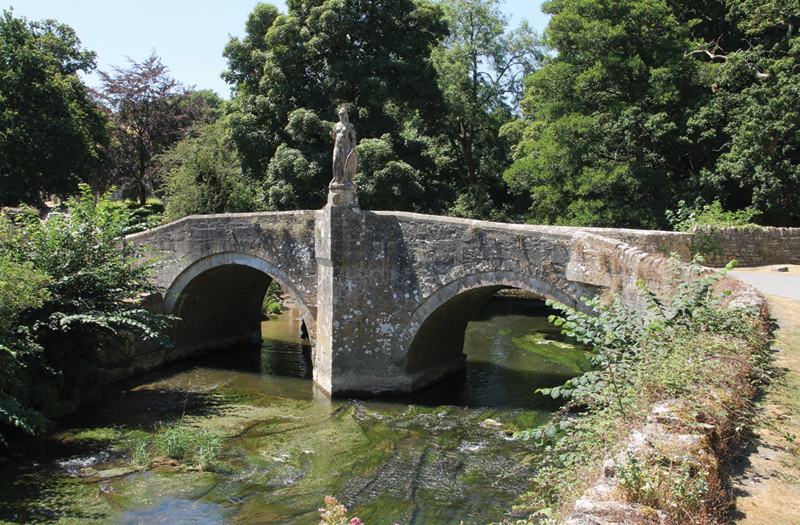 The Bridge at Iford

Arriving at Freshford by train, head up Station Road, turn left downhill at the end and follow the lane as it curves right past the Inn at Freshford (ST791600). Carry on across a bridge over the River Frome, and after 100m turn right through a kissing gate (KG), where you will see two tracks. The one bearing left is the official footpath; the one heading towards a pillbox and alongside the river is unofficial. Whichever you take, on the far side of the field, go through a KG and turn right along a lane (ST787597).

As you turn left alongside the river, you will see another pillbox on the opposite bank. After passing Freshford Mill, now being converted to housing, the lane crosses a bridge to follow the right bank of the river. When the lane forks, bear left past another pillbox. On your right is Dunkirk Mill, built around 1795 with five storeys, but reduced to three when converted to housing in the 1970s. Opposite its gateway, turn left along a footpath.

After going through a gate at the end, carry straight on with a fence on your left. This open space is the site of a Carthusian friary, where the lay brothers of Hinton Priory lived and worked. No trace of the friary survives above ground, although the cottage to your right may incorporate material from the friary chapel.

Continue down two sets of steps, and, after crossing a brook, turn left along a lane, and almost immediately right along a rough track. Go through a five-bar gate, across a meadow and through a KG into Friary Woods (ST790591).

At the end of the woods, squeeze past a stile and carry straight on through a large field. Go through a gate at the end and turn left along a lane past Iford Mill. A little further on, a bridge leads across the Frome into Wiltshire (ST800589). Ahead lies Iford Manor, whose gardens were designed by Harold Peto on a steep hillside in the early 20th century, incorporating antique columns, sculptures and sarcophagi. A Japanese garden, Italianate cloisters and a Roman-style terrace are among the delights of this timeless garden where the sound of water, running down rills or flowing from fountains, fills the air. 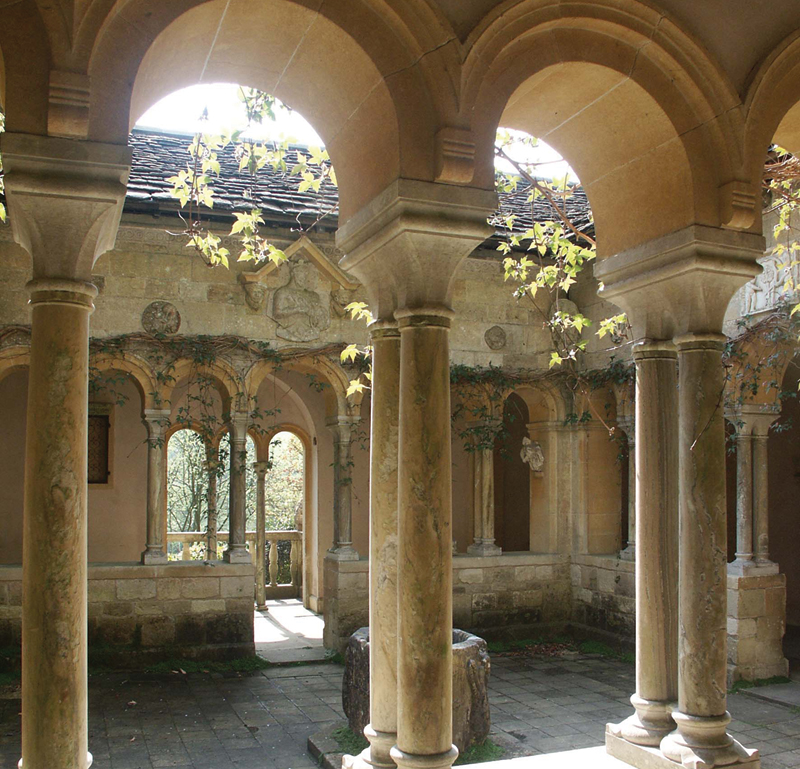 On leaving the gardens, turn left alongside the river and follow the lane as it curves steeply uphill. At the top, after passing a turning to Iford Fields, bear right at a T-junction and carry on along the road for 500m. After passing Orchard Close on the left, continue for another 50m, before climbing steps on the right to cross a slab stile (ST809591).

Carry on along a path through a KG and a handgate. At a crosspath, carry straight on alongside a wall to emerge by Westwood church. Its Perpendicular tower, dating from around 1500, is regarded as one of the finest in Wiltshire. The church also contains medieval glass and a carving of a predatory devil, known as the Westwood Imp, over the font.

After visiting the church, carry on through the churchyard and turn left into the grounds of Westwood Manor, described by Nikolaus Pevsner as ‘a perfect Wiltshire manor house’. Walking into its cool interior is like stepping back into the 17th century, largely due to sensitive restoration and discreet embellishment by Edgar Lister, who boughuntilthe manor in 1911. He also collected tapestries and early keyboard instruments, and upholstered the antique furniture in the house in historically appropriate styles. The manor was bequeathed to the National Trust on his death in 1956. 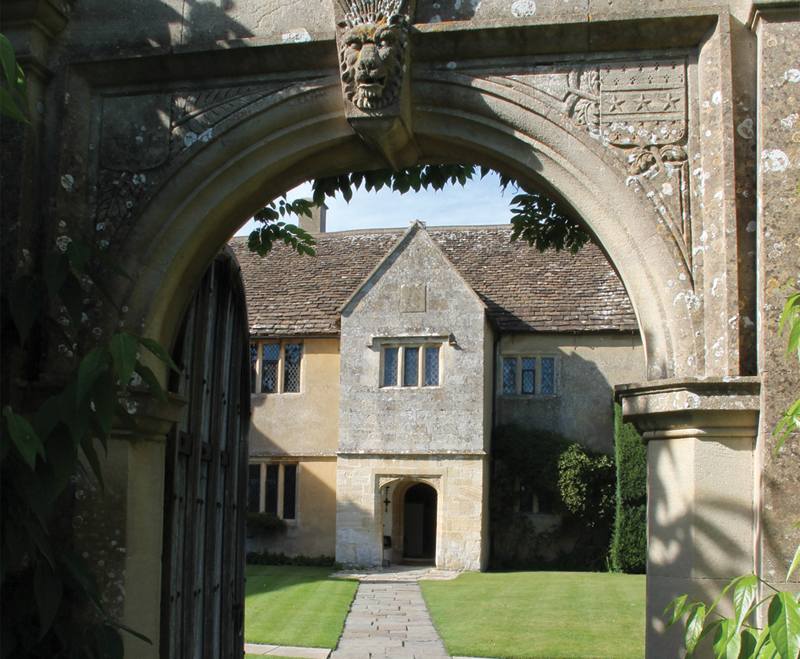 From the manor, retrace your steps through the churchyard and back along the path to the slab stile. Turn left along the road and after 50m, turn right along Orchard Close. After 50m, turn left along a footpath, and, 30m on, right along another footpath. At the end, carry on along a road, and, when it swings left into Bobbin Lane, carry straight on along a footpath. Continue in the same direction until steps lead down to a road with a wall letter box opposite. Turn left and continue for 25m, before turning right down a lane (ST806597).

After 65m, look for two footpath waymarks on the right. Follow the left-hand one downhill through beechwoods, go through a handgate at the bottom and carry straight on down the lane ahead to Avoncliff, where the Kennet & Avon Canal crosses the River Avon on an aqueduct.

A little way along the track, you come to a building ranged round three sides of a courtyard. Built for millworkers in the 1790s, it was converted to a workhouse in 1835, before becoming a war hospital in 1917 and later a hotel. It has now been converted into 12 residential units. Continue through a KG and along a shady path (ST803599). After going through another KG, you will see a pillbox by the railway embankment across the river.

Continue through a meadow and along a riverside path, at the end of which Tess’ Gate leads into a final field. Just ahead is the confluence of the Frome and the Avon, but our route lies diagonally across the field, past another pillbox and through a KG, before turning right across the bridge to the Inn at Freshford and the station.

Approximate time: 2.5 hours for the walk; an hour or more at each of Iford and Westwood; plus refreshment breaks

Level of challenge: Some potentially muddy sections; sheep and cattle may be in some fields

For details of train services and changes to advertised times, visit: nationalrail.co.uk