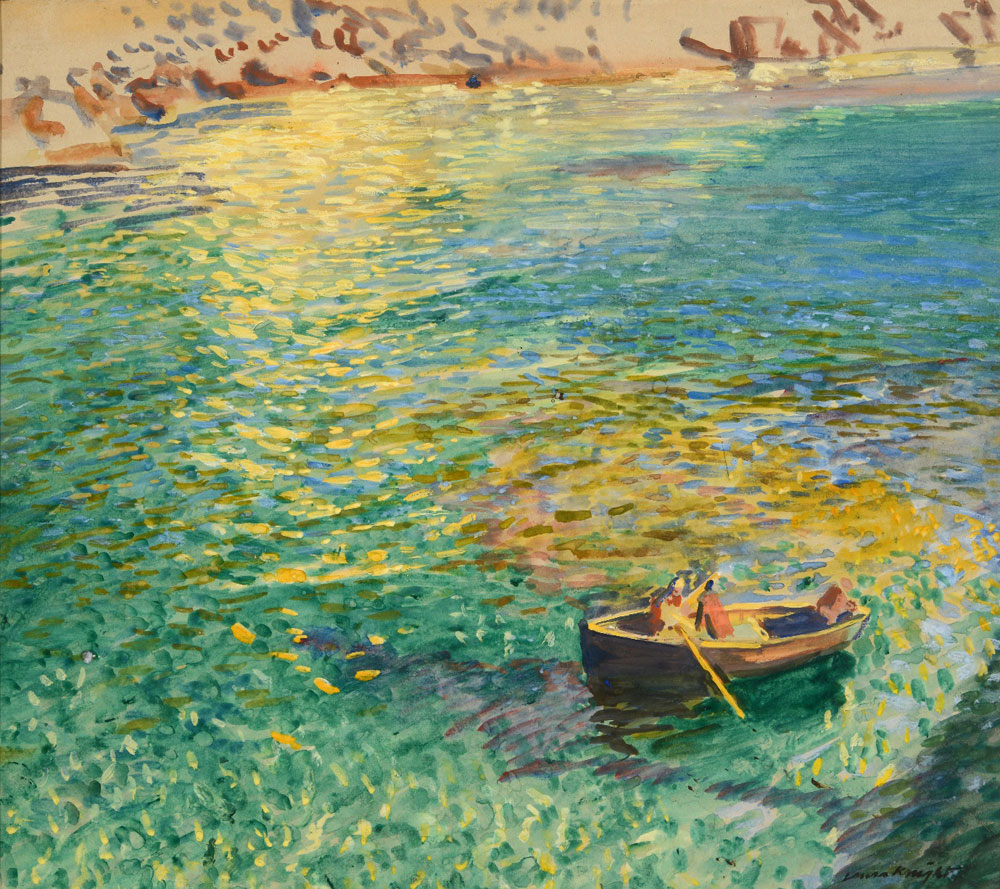 A trip down memory lane with Lawrences Auctioneers – Part II

in the second of this special series on antiques and collectables, Chris Flower and Andy Sagar of Lawrences remember discarded treasures in clients’ houses which exceeded expectations.

We are transporting ourselves into brighter days ahead with this watercolour and gouache by Laura Knight (1877–1970), Lamorna Cove that came to auction at Lawrences in Crewkerne.

It was offered for sale with a letter from the artist to the original buyer, thanking her for her cheque of £78.15s, which read:

Dear Mrs Murray
Your very kind letter and cheque for £78-15-0 enclosed, has been sent on to me at the above address [Park Hole, Colwall, Nr. Malvern, Worcs.]. I hope you will love `Lamorna Cove` (No119) when it is delivered to you by my agent, Messrs James Bourlet, at the close of the Diploma Gallery on September the twelth [sic] … where to; The wonderful way in which you speak of my exhibition fills me with joy and encouragement. Although I am now an antique, I hope I have not become just a piece of furniture.

With many thanks,
yours sincerely,
Laura Knight

Additional notes:
Following her marriage to Harold Knight in 1903, Laura Knight and her husband moved to the artists’ colony of Staithes on the Yorkshire coast. They failed to thrive financially and, after a holiday in Cornwall in 1907, they moved to Newlyn where they settled much more contentedly. They mixed (and shared painting trips) with all the other artists, including Alexander Stanhope Forbes, Ernest and Dod Proctor, Alfred Munnings and Samuel John Lamorna Birch.

The Knights spent twelve years in Cornwall before moving to London in 1919, but they maintained a happy association with Newlyn during their holidays. In Janet Dunbar’s book on Laura Knight (1975), she writes, “The sunlight on this Cornish Coast was unlike anything Laura remembered in Staithes … it was golden, glowing, turning the blue-green sea into sparkling iridescence… Laura wholeheartedly accepted the tenet of the Newlyn School that outdoor subjects, like landscapes and seascapes, should be faithful transcripts from nature painted from first to last on the spot.”

“The little bay”, Knight recalled, had been “turned to gold by the reflection of the sun shining on the cliff above … it was an excessively bright canvas”

The view is from Tregurnow cliff top, above Flagstaff Cottage, looking down into Lamorna Cove. Granite from these cliffs was hauled to London for the building of the Thames Embankment. This early composition for the celebrated oil concentrates upon the glittering light of the water that has filled the cove upon the rise of the tide. “The little bay”, Knight recalled, had been “turned to gold by the reflection of the sun shining on the cliff above …it was an excessively bright canvas”. Indeed, the subject was so memorable that it lingered long in Knight’s memory, so much so that, during a week of murky fogs in the capital in the winter of 1919-1920, she developed her sketches and her acute visual memory into the stunning exhibit for the Royal Academy that summer (no.618). The challenge was to recall the sparkling and ever-changing colours that had so memorably illuminated the cove. Such was Laura Knight’s inspiration that she managed to pin down just enough of the glorious light, sunshine and rippling water on that magical day to recreate the special `ebullient vitality` of the Cornish coast in the dark days of a London winter whilst 300 miles away from the county of Cornwall that she loved so much.

While their doors remain closed, Lawrences are still on hand to help you find out the value of your items free of charge. Please visit lawrences.co.uk.
You can also email them at enquiries@lawrences.co.uk or call and leave a message on 01460 73041.