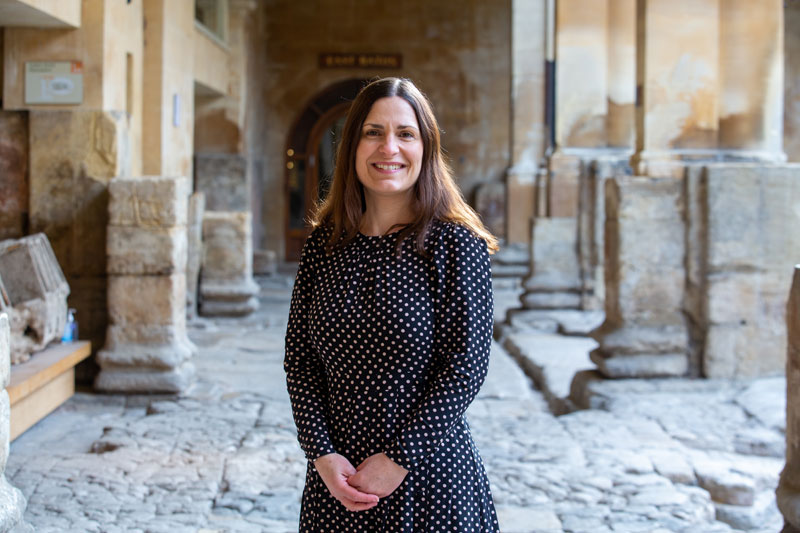 A Roman connection: in conversation with museum curator, Amanda Hart

There’s a new face at the Roman Baths and it’s not a Roman character in costume – it’s museum curator, Amanda Hart. Fortunately she’s a fount of knowledge about archaeological collections and all things Roman and as the innovative Archway Project has reached its final stages, she has plenty more ideas to make the site relevant to all types of visitor, says Emma Clegg.

Amanda Hart started her new role as Roman Baths and Pump Room Manager in January this year. Talking about her first day at the Baths, she says: “I arrived early – it was a very cold, frosty morning but there was beautiful sunshine. I came down to the Baths and the waters were steaming. And there is something quite spiritual and magical about that.

“I’m obviously not the only one who thinks this, because people from the Mesolithic period [about 10,000 to 8,000 bc] thought the same and they put flint artefacts into the spring water as offerings to their revered spiritual being, and that has continued ever since. So we have this consistent connection with this spiritual place – and you feel that when you are here.”

The Sacred Spring with its warm, mineral-rich waters has risen for thousands of years at the heart of the site of the Roman Baths, which may possibly have been a Celtic centre of worship. The Romans later dedicated the site to Sulis Minerva, the goddess of wisdom, and built a temple in 60–70 ad in the first few decades of Roman Britain. This led to the development of the small Roman urban settlement known as Aquae Sulis around the site, with the Great Bath with its ornate columns at the centrepiece of the complex. The Roman Baths, designed for public bathing, were used until the end of Roman rule in Britain in the 5th century ad. The spring is now housed in 18th-century buildings, designed by architects John Wood the Elder and Younger, and includes the Victorian expansion of the Baths complex.

Museums have transitioned from a place of assumed knowledge with curators interpreting the past as fact, to a role that is more about co-curation

The City of Bath has been a World Heritage Site since 1987 and the Roman remains are one of the principal reasons the city has this ranking. In 2019 the Baths & Pump Room had a record-breaking year for visitors, welcoming 1,325,085 people. Despite being closed for 138 days due to the pandemic in 2020, the site was that year named as the 32nd most-visited attraction in the UK. Most recently the Roman Baths has been voted number one in the UK and number eight in the world by Trip Advisor, so interest seems in no danger of flagging.

So what does Amanda bring to the management of such an ancient and beloved site? Well, it would be hard to source a more ideal post-holder. With a university background in archaeology specialising in Mediterranean prehistory and a Masters with a focus on Archaeological Curatorship, before coming to the Roman Baths Amanda was for 10 years the director of the Corinium Museum in Cirencester. For the last six years she led a major transformation there, in the redevelopment of the museum’s prehistoric and early Roman galleries, which saw a redisplay of material and the introduction of newly acquired artefacts, doubling the number of objects on display. “That was very exciting because the galleries hadn’t changed for more than 25 years, and there was an awful lot in storage that hadn’t been accessible to the public, so we were able to interpret that and get it out on display,” says Amanda.

“Corinium is essentially a Roman museum – although it has other amazing collections as well – so I’d been working with Roman collections for over 20 years and moving to the Roman Baths just seemed like the logical step.

“Of course the level of operations here is on a much larger scale. What sets it apart most is that this is an ancient scheduled monument. At Corinium I was only dealing with the collections; here it’s the monument, and I’m learning very quickly about managing an ancient scheduled monument and all that that entails. It’s a huge responsibility as well as an absolute privilege.

“In terms of the whole operation, there are several departments here that take care of different aspects of running the Roman Baths – there is a whole commercial team that look after events, the catering, the retail, for example, as well as a marketing department. There were only a few of us at Corinium where I was much more hands-on; whereas here I’m involved in the day-to-day running at a more strategic level.”

Amanda joined the Baths towards the last stages of the Archway Project – which included the creation of a World Heritage Centre; the Roman Baths Clore Learning Centre for school and community groups; an Investigation Zone set among real Roman remains; and the opening of new areas of the Roman Baths including a Roman gym and laconicum (a type of sauna).

“The Archway Project is a game-changer for us, because previously there was a very small education space on site, but no additional facilities. So these amazing dedicated spaces are inspirational spaces for learning. They don’t look like a classroom environment – in fact one of the learning spaces looks almost like a Roman theatre. Then we have this whole underground Investigation Zone, which is unique in the country. It’s hands on archeology so the children are interacting with the archeology in a practical way.”

Amanda explains that there has been a real shift in perspective in the museum sector over the last few years, accelerated by Covid, and this has had an impact on the Roman Baths: “Previously there has been this acceptance that because the Roman Baths is such an international tourist destination, we don’t have the same pressures as other museums, in that we can just open our doors and we know that people will come. But there was a change in emphasis when the international tourism market dropped off during Covid because we needed to find a way of engaging with our local audiences. That new direction was key, because we needed to become more relevant to our local community – and that idea is embedded in the background that I come from. The Roman Baths are amazing; there isn’t another hot springs in the UK with the same temperatures as the Bath springs – hot water at a temperature of 46°C rises here at the rate of 1,170,000 litres every day – and I think it’s important that our communities feel part of that heritage.

“Museums have also transitioned from a place of assumed knowledge with curators interpreting the past as fact, to a role that is more about co-curation – understanding that when people visit they bring with them their own background knowledge and experience – and this leads to a much better all-round interpretation of a site or collection.

The Baths have refreshed their visitor offerings regularly over the years – including the innovative audio guides introduced in 2005 which are now available in 12 different languages, and the costumed Roman characters that have wandered around the site since 2012, based on real people who lived and worked at Aquae Sulis 2000 years ago. Amanda tells me that if she talks to any one of these Roman figures they always answer in character, thereby providing an immersive experience at its best. “An immersive experience brings your experience of the past to life,” says Amanda. “People want to feel something now: they want to have an emotional response to a site and an object. The way museums are trying to respond to that is to become more relevant and to tap into current issues and how that impacts on the stories that we tell. Personally I think the Roman Baths need to be better at that. That is one of the things that I am looking to do.”

“I am the first woman curator on the site from a long line of male curators and I think that influence changes interpretation, so there are more stories we can tell. One of my plans is to look at the role of women in Roman society. There is also an opportunity to look at disability – many Romans would have been coming here to bathe in the waters for health reasons and I’m interested in exploring that. Then there is the potential of tapping into multi-cultural Roman Britain – there has been a lot of work done on that in recent years, and Aquae Sulis was a site that people would have been coming to from all over the Roman Empire. There is so much potential there.”