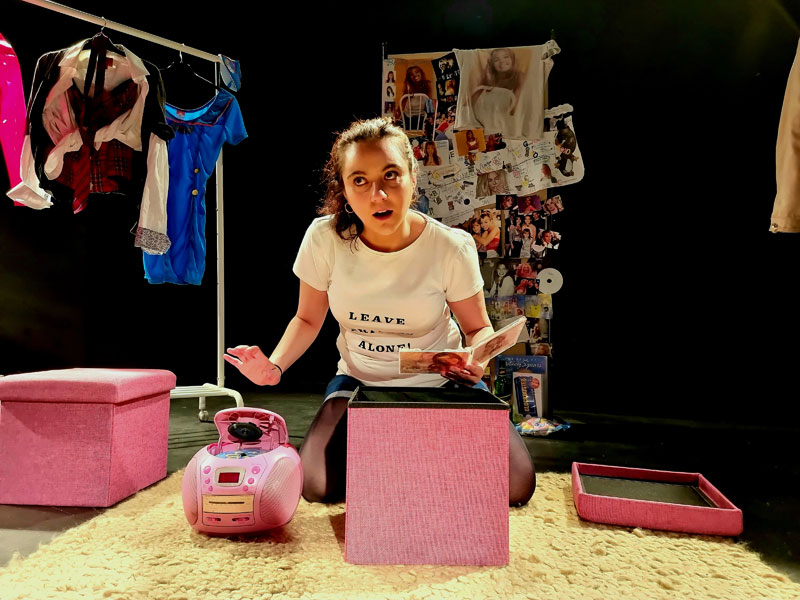 A piece of Britney

The narrative arc as we know it today all comes from Aristotle and his book Poetics. The set-up, the inciting incident, the crisis, the climax and the resolution. Those are the five points that you hit.”

Writer and director David Shopland is explaining how every story we tell – in books, film or the theatre – has a natural pattern. “It’s amazing how difficult it is not to follow. Even if you’re trying to write something really radical you will always end up falling into that pattern because it’s human nature – that’s how we’re programmed in terms of how we want to be engaged by a piece of work, and if you put anyone’s real life against that kind of structure it will hit those kind of points.”

Britney Spears’ life (and she’s only 39) has already had plenty of narrative drama, and it’s been played out in a very public forum. But David’s new production, Saving Britney, at the Rondo Theatre from 23–24 July, isn’t so much about Britney herself as about the cult of celebrity and how powerful the idea of a public figure can be.

“I’m not particularly a huge Britney Spears fan,” says David, “but I’d started to see these underground rumblings about her, just before the Framing Britney Spears documentary by The New York Times came out in February.”

The documentary examined how the singer has been treated by the media and those around her over the years and shone a spotlight on the conservatorship the singer has been under since 2008, which means she is not in control of large parts of her life.

“What I found fascinating about the reaction to that film and the #FreeBritney movement was that it conjured up a lot of things about the relationship between a fan and a performer or celebrity. I saw this really interesting dynamic where Britney is being trapped from both sides. She’s got these pretty awful managers and by all accounts not a particularly nice father, and she’s been controlled by all these men. And the paparazzi have been dreadful to her. Then on the other side you have these amazingly vocal and passionate supporters whose hearts are in the right place, but never once has she actually said that she wanted that support.

“Around this time I came back to Bath to visit my folks and I ended up locking myself away in my old bedroom for a couple of days and the play just kind of came out of me. I wrote 16 pages in two days, and it became a story of this young millennial from the south west, a superfan who had spent her whole life thinking that she had all these things in common with Britney Spears.

“But the show itself is also about what it was like to grow up in the late nineties and early noughties – an era for which there is a lot of nostalgia – and it’s as much about finding your place in the world and how much weight you put on certain things and people, and how idolising strangers can help you at times but it can also be a hindrance. It’s also a very universal story, a story of finding your place in the world and feeling your way through life and how you become the person you become.”

The one-person show was devised with actor Shereen Roushbaiani who plays the role of the main character Jean. David revels in the format: “I am drawn to monologue plays. For me it’s a lot of freedom because there are far less logistical things to worry about and no other characters. As a director it’s inspiring because you’re not worrying about how many bodies are on stage and whether a sightline is being blocked. And you can be more creative with one person on stage. It also takes a very special kind of performance to engage an audience on your own for that amount of time.”

David trained with Shereen at Rose Bruford College of Theatre & Performance. “I remember being absolutely struck by her talent when I saw her perform,” he explains. “Shereen devised Saving Britney alongside me because I was conscious that as a straight white man I didn’t want to be writing a one-woman show about a pansexual millennial woman without any input from someone who lives in that sphere of identity. So she helped me bring an authentic voice.”

It’s not a musical, but there are moments where Shereen sings from Britney’s repertoire as part of the narrative. “There are seven interludes within the monologue that break up the action. They include slightly mashed-up versions of Britney songs, which follow her discography, so you get Hit Me Baby One More Time in the early part and as you go through you can see how the sound changed and that reflects the change in Jean as well.”

The stage set is simple, explains David. “We’re booked in to do a full regional tour in 2022, but neither of us can drive. So I had to think of a set that can look evocative and aesthetically pleasing but could also pack down into a giant suitcase. So we’ve got clothes rails and boxes which all fold down.

“It’s a representation of the bedroom of a nineties teenager with posters, and some of the iconic outfits from Britney’s career, so you’ve got the schoolgirl outfit from the Baby One More Time video, the red cat suit from the Oops I Did It Again video and the air hostess outfit from her Toxic video all hung up around the set.”

The storyline has also been adjusted as Britney’s own story has played out. “The end of the play changed fairly drastically only a couple of months ago based on an Instagram post that Britney put out, which alluded to the fact that perhaps she didn’t feel comfortable with all this attention. That idea has shifted the play a little bit, so it has been very much an evolving thing.”

The show launched at the prestigious Old Red Lion Theatre in Islington in May, where it played for three weeks to sold-out audiences, won rave reviews and was nominated for two OffWestEnd ‘Offie’ Awards for leading performer and direction. After its run at the Rondo, there is a full regional tour from January to March 2022 and a provisional booking at the Edinburgh fringe 2022. It may also be performed in Los Angeles, where Britney fever runs high.

Despite his travel itinerary David maintains strong local roots. He has strong memories of Dave Langley, his drama teacher at Prior Park School: “He was my first real big inspiration – he opened my eyes to how incredible theatre was and got me interested in acting.” David was also involved with the Rondo for several years, where he appeared in a number of plays and directed his first play there when he was 17. His company Fake Escape (which he formed and runs with two friends) also organise the annual 20:20 Vision New Writing project, part of the Bath Fringe Festival, which uncovers voices within the next generation of playwrights aged 18–30 and gives a public platform to writers who otherwise may remain unheard.

I ask David about how he approaches writing a play. Is there a process he follows? “Because I have always been completely immersed in the world of theatre from the age of 16, I’ve always written and directed and performed and produced, so I guess I approach it differently to playwrights who are just writers because I always look at it with a visual eye, and write for the visual medium. So there’s not really a linear process for me. I write to facilitate the creation of a show to be watched, rather than writing to write and working out how to put it on later.”

David comes from theatrical stock. His grandfather was an actor who played the part of the lumberjack standing next to John Cleese in the I’m a Lumberjack Monty Python sketch. He also shared a flat with Sean Connery for several years and both of them were friends with Roger Moore and Larry Hagman, before they became stars. David’s grandfather didn’t become famous, but it’s clear that he’d be overflowing with pride at the achievements of his grandson.

Saving Britney is at the Rondo Theatre, Bath from 23–24 July; rondotheatre.co.uk