A bit of cinema history: The Little Theatre

Known for its comfy chairs, vintage aesthetics, and the smell of mulled wine that wafts up the stairs from the kiosk as you enter, The Little Theatre Cinema in Bath is a firm favourite for watching new releases, much-loved classics, and live cultural screenings from top theatres from around the world

Built by community theatre pioneer Consuelo de Reyes and her husband in 1935, the Little Theatre Cinema has remained in the same family since, retaining some of the decorative features of a typical 1930s cinema while more recently undergoing a discreet conversion into a two-screen art-house cinema. It is also now part of the wonderful Picturehouse Cinemas group.

The Little Theatre opened on 10 May 1935 with Consuelo de Reyes choosing Vickie as the opening production. The Little Theatre originally had 210 seats in the stalls and circle levels. The proscenium was 16 feet wide and the stage 16 feet deep. There were six dressing rooms, and from 20 January 1936 it was equipped with a Western Electric (WE) sound system and became a news and interest cinema. 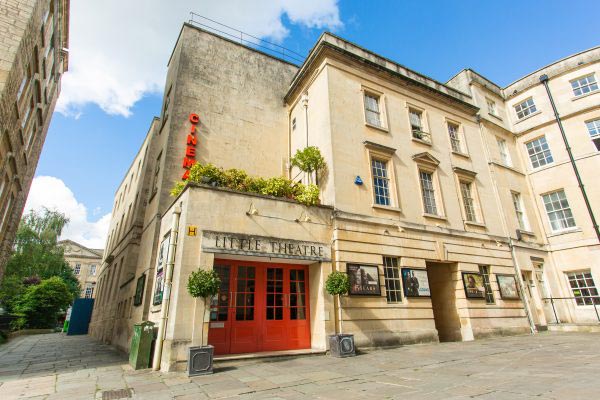 The cinema also boasted a tea and coffee lounge for the convenience of its patrons. It went on to playing feature films from 1939, the first two being Peg of Old Drury starring Anna Neagle, followed by Oh Mr Porter starring Will Hay.

The cinema thrived on local support throughout the years as other Bath cinema venues closed, and in 1979 the former scenery store and lounge area were converted into a second screen.

In spite of many refurbishments to keep the cinema up-to-date with digital sound and the latest projection technology, as well as a renewal of the seats to give the very best comfort levels, The Little Theatre has retained the charm and welcoming warmth of a 1930s cinema, including a luxury balcony with sofas in the main auditorium.

If you have ever seen the classic British comedy film The Smallest Show on Earth then you know what to expect here – its cosy, lovely and very old fashioned, except it is well maintained and has a great art-house film programme.

This cosy little gem can be found in a small square off the main streets in Bath city centre and has a classical facade of cream stone.

The stunning Agrippina from the Met Opera will be screened on 29 February, with an encore screening on 6 March.

Enjoy the incredible Radioactive: Preview and Satellite Q&A on International Women’s Day on 8 March and learn all about the pioneering scientist, Marie Curie.

Take a trip back in time with Nick Mason’s Saucerful of Secrets as he looks back on his time with Pink Floyd on 10 March.

Discover the of Wagner with Der Fliegende Hollander from the Met Opera on 14 and 20 March.

The magnificent Fidelio from the Royal Opera House is showing on 17 and 23 March.

A deeply personal tribute to a star tenor is showing on 24 March, Jonas Kaufmann: My Vienna.

The Bolshoi Ballet bring to life Romeo and Juliet on 29 March.

The Royal Opera House perform the exquisite Swan Lake on 1 April, with an encore screening on 6 April.

For the incredible Vintage Sunday Season, the Little is showing some of the great works from legendary Italian director Federico Fellini. I Vitelloni on 8 March, Nights of Cabiria on 15 March, La Dolce Vita on 22 March, 8 1/2 on 29 March and Juliet of The Spirits on 5 April.