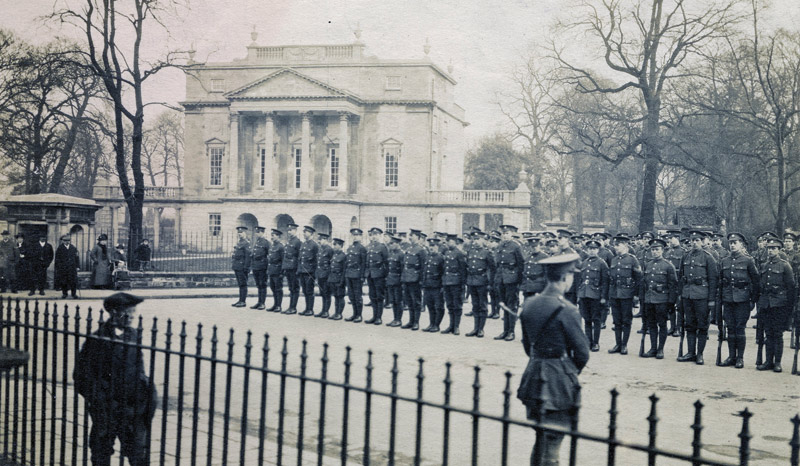 1915: Ghosts of Christmas past

It’s interesting to compare the Christmas festivities celebrated in Bath today to that of 100 years ago. In 1915, Britain was fighting the First World War. The hope that war would “be over by Christmas” was long faded, and now the population were beginning to endure the start of rationing (fuel, sugar and eggs), and a severe cut in public house licencing hours. London had experienced its first ever air raid (by a Zeppelin), war hospitals were being set up around the country, and troops were still firmly entrenched abroad.

Many men in Bath had volunteered to join the armed forces; swept along by the tide of patriotism and recruitment drives. Conscription did not start until 1916. In their places came Belgian refugees, regiments of Australian and Canadian soldiers, as well as the war-wounded.

Just as today, there were appeals to help those in need. The churches made appeals through the local paper for people to fill the red envelopes being delivered to every home with money to assist the locally-housed Belgian refugees. Money pledges were also sought through schools and societies to enable fighting soldiers abroad celebrate. Students at Bath Technical College made and despatched 150lbs of plum pudding for soldiers on the Front in 1915.

Local businesses and philanthropists also made gifts of food, drink and toys to the hospitals of Bath.

At The Royal Mineral Water Hospital, 120 soldiers, along with 12 male civilians, spent Christmas in wards festooned with evergreens, miniature flags and mottos. Father Christmas was impersonated by the Matron, Miss Terry, and on Christmas Day itself the men tucked into a feast of turkey, ham, sausages, plum pudding and desserts.

Over at the Red Cross Hospital at Lansdown Place the wards were decorated with paper chains and holly, while at the Royal United Hospital (still a civilian hospital until 1916), the men’s ward had been turned into a snow-scape using fleece. Decorations at Newton Park Hospital, the Somerset home of the Earl and Countess Temple, were more luxurious and consisted of hot house flowers and fruits, dummy shrapnel cases filled with chocolates, and a Christmas tree.

In Bath homes festive decorations would be similar. Evergreens and holly picked from local parks and gardens could brighten up the home of even the poorest person, and paper-chains were easy and cheap to make. Candles were often placed on trees and crackers were a popular gift, filled with fruit and nuts. Stockings were hung at the end of beds or on mantelpieces in anticipation of Father Christmas.

Just as today, local shops would try to entice customers with their window displays. Evans and Owen’s Department Store on Bartlett and Alfred Streets chose their 1915 theme to be The Dardanelles in Bath. This was most likely a recreation of the naval battles that took place in that Turkish area. Window shoppers to the store were also invited, according to the newspaper advertisement, to enjoy a ‘Giant Goose laying golden eggs’ and ‘mechanical pelicans delivering presents.’

The First World War had interrupted the production of toys especially since the world’s largest toy producer happened to have been in Germany. Children’s gifts in 1915 tended to be patriotic in nature and consist of toy soldiers, cannons, airplanes and board games of battles. Other popular gifts included mittens, dolls, rocking horses, skates, books, toy trains, oranges and sweets.

Gifts for soldiers tended to be of the practical sort, and even those who were wounded received penknives, blankets and coats; as well as the “fuel of the British Army” – cigarettes and tobacco. At the RUH, Cadbury’s of Keynsham sent over 60 boxes of chocolates to be distributed around the wards. Christmas cards sent during the First World War by the author’s great-grandfather from The Front. (author’s own)

Handwritten letters, cards and parcels were the only form of communication between loved ones. Bath Post Office reported that in the week leading up to Christmas Day 1915, the depot in Newark Street received approximately 33,260 letters, packets and newspapers to send out.

Not everyone could afford a Christmas. There is little evidence regarding the destitute of the city, but we do know that in 1915, the Stead Hostel for Women in Abbey Gate Street, an organisation created to prevent women and girls falling into a life of crime and debauchery, fed 22 guests on Christmas Day including three elderly ladies who had been invited to dinner on the recommendation of the Salvation Army.

In contrast, the hotels of Bath in 1915 were reported to have been “full and overflowing” that Christmas. Guests at many of the hotels, such as The Empire, The Pump Room and Lansdown Grove, enjoyed dancing, singers, orchestras, conjurers and a ventriloquist. At the Spa Hotel guests could choose from whist drives and picture or music competitions. On Boxing Day there was a gymkhana, which included crab and potato races, button sewing and placing the donkey’s tale. Shopping for Christmas was not as easy as it is today. Everything was bought from the local butcher, baker, greengrocer or fishmonger. The only sign of anything remotely like a supermarket was Cater, Stoffell and Fortt on the High Street and Margaret’s Buildings, where you could purchase a number of goods under one roof.

Christmas dinner hasn’t varied much since those days, although turkey was less popular than it is today. It was more common in 1915 to enjoy goose, chicken or beef. Christmas fare on the Front for some was no different than at home, if they were lucky; however an unidentified Bathonian Sapper in the Wessex Regiment wrote to his parents in 1915 bemoaning: “we had a Christmas dinner of bully beef and biscuits which did not go down very nice. Boxing Day was a little better because we had some stew, also Christmas pudding.”

In the absence of radio, television and the internet, afternoon entertainment was a big feature of Christmas Day and Boxing Day. Entertainment would have included songs, gramophone records, dances and games.

If one did venture out, then the pantomime of 1915 at the Theatre Royal, was Aladdin, starring Mable Hind in the title role, Fred Hutchings as Abanazer and the music hall comics, The Valdo Brothers as The Policemen. At the Vaudeville Electric Theatre in Westgate Street during Christmas week the silent movie choices were Nan in Fairyland and Cinderella starring Mary Pickford.

On Tuesday 28 December the Corporation of Bath arranged a children’s party at the Pump Room, where tea was served, dances, games and a Punch and Judy show enjoyed, plus an appearance by Father Christmas.

For those who wanted to arrange their own children’s party, an article written by Marie Harrison in the Bath Chronicle and Weekly Gazette of 18 December 1915 shares some sage advice and inadvertently demonstrates to us today how children of 100 years ago were little different: “I do not believe modern children are naturally more precocious and blasé than children of former years, but there is a tendency to spoil little ones. We accustom them to seek their happiness merely in material things and so surfeit them with presents and amusements so that (they) become supercritical and easily bored.”

Regardless of the lack of technology and the circumstances of war, Christmas in Bath 100 years ago was little different to how it is celebrated today. Children were no less excited, parents no less exhausted, and families no less hoping for peace and a happy new year. As a Bath newspaper of 1915 reminds us, “Keep Christmas – but don’t keep it all to yourself.”

Main picture: Troops on parade in Great Pulteney Street in 1915.

Picture from the archives of Bath in Time. If you’d like to buy someone a historic photo of Bath visit: BathinTime.co.uk