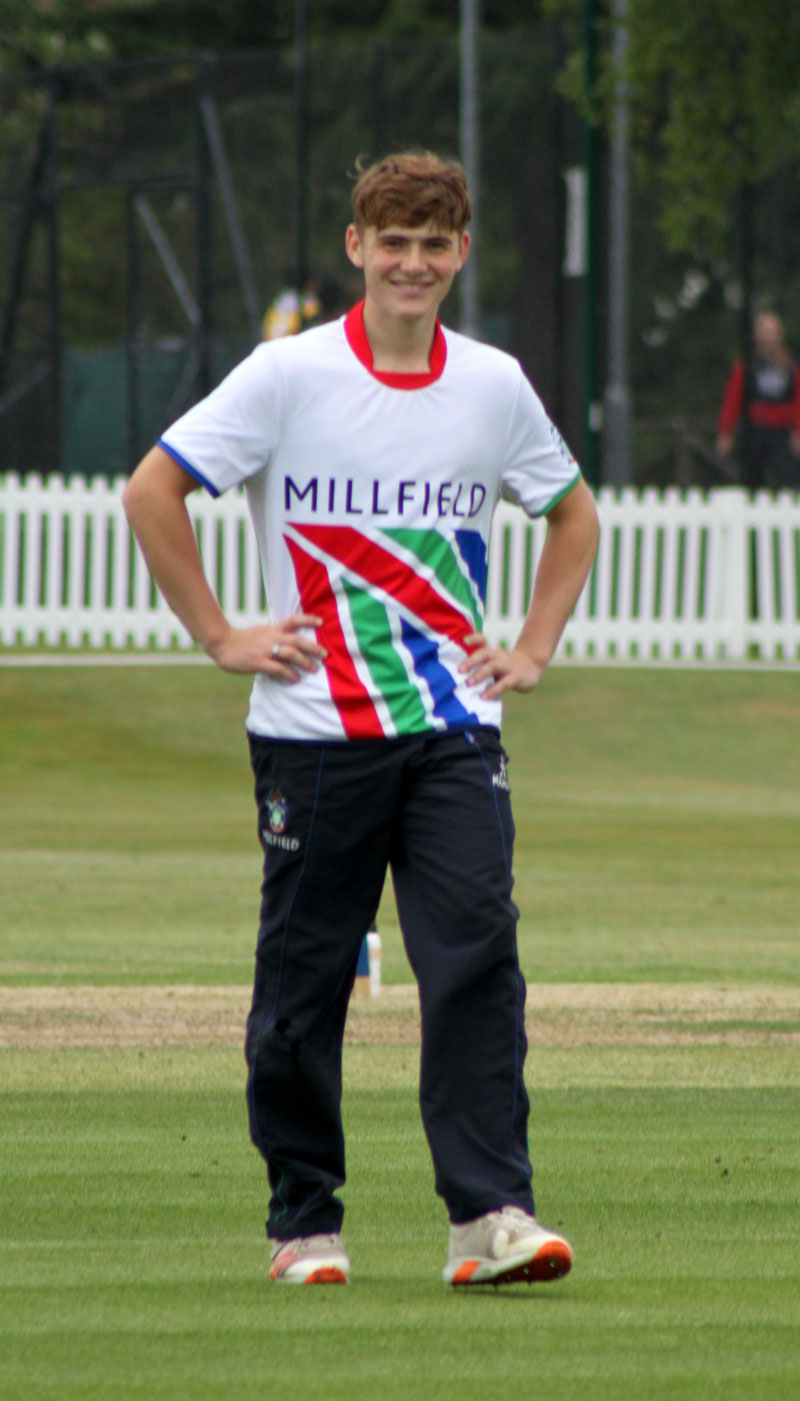 Millfield Cricketer Dominic Kelly has been selected to make his first-class senior debut for Hampshire County Cricket Club, at the age of just 16.

Dominic, who is in Year 11 at Millfield, is the youngest student in the school’s glittered cricketing history to receive a first-class call up. He is due to bowl either first or second change in this weekend’s match, and will bat at number eight as Hampshire take on a Sri Lanka Development XI at the Ageas Bowl, Southampton on 13 May.

The budding sportsman joined Millfield Prep School in Year 6, where he was coached by Millfield Prep’s Director of Cricket David Beal, who provided an excellent foundation for Dominic’s game. After transitioning to the senior school, Dominic’s cricket went from strength to strength, with him making his Millfield cricket first team (Meyer’s XI) debut while still in Year 10 — a very rare feat.

Dominic was the first Millfield student to take part in the school’s St Stithians exchange programme, which sees Millfield students attend the college in South Africa to gain valuable life and sporting experience. During his time in South Africa, Dominic was hosted by the De Toit family, whose son, Reuben De Toit, currently attends Millfield and scored an impressive 206 not out in a recent game against Blundell’s School.

At Millfield, Dominic has benefitted greatly from the school’s ‘release policy’. The policy, which has been in place at Millfield since 2014, enables players to be released from school to spend adequate time with their ‘mother county’. As a result, Dominic has been able to represent Hampshire at U18, academy and second XI level at weekends, and form valuable bonds with teammates and coaches in the process. This policy is a key part of Millfield’s cricketing programme, and has contributed to the schools stellar record of U19 international calls-ups and players graduating into the professional game in the eight years since its implementation.

Hampshire CCC Director of Cricket, and former Millfield student, Giles White, said, “It’s been great to follow Dom’s progress during the winter. He worked extremely hard on all aspects of his game. The reward of a first class debut at such a tender age is testament to his commitment. He has transferred this into his performances on the pitch over the last couple of months and we are looking forward to seeing him develop further over the next few years.”

Dominic said, “The cricket programme at Millfield is fantastic. What makes it so special is the top-level coaching and facilities on offer to us, and the busy fixture list at the school that gives us an opportunity to put what we have learnt into practice.”

Millfield Director of Cricket, Mark Garaway, said, “It is fantastic news that Dom is going to make his first team debut this weekend for Hampshire; this has come off the back of a very hard-working winter programme which has been split between the Ageas Bowl and Millfield. The diligent way that Dom has connected with the programme, our bowling coach, Ethan Harris and the coaches at Hampshire enabled Dom to start the season strongly with both bat and ball. It is always good to see Millfield Cricketers playing in first-class games of cricket. Ordinarily, this comes on graduation from our programme at the end of Upper Sixth. In Dom’s case, he makes his debut during his GCSE exam season. Dom started his Millfield journey under the tutelage of Dave Beal at Millfield Prep School and that excellent grounding has been further developed through his programming here at Millfield and with Charlie Freeston, the Hampshire CCC Academy Director. Good luck to Dom. We will be watching the scorecards with an eagle eye.”

Millfield’s cricket programme caters for students of all abilities. Millfield students enjoy top class cricket coaching and facilities, including numerous cricket squares and a combination of outdoor grass and all weather nets. The campus has several cricket pavilions, including the stunning Wilson Pavilion. Millfield opened its state-of-the-art cricket centre in March 2020, which features new PitchVision technology on three lanes, a 4G fielding area, three adaptable bowling and batting surfaces, as well as five nets and an expansive 22 metre run-up.