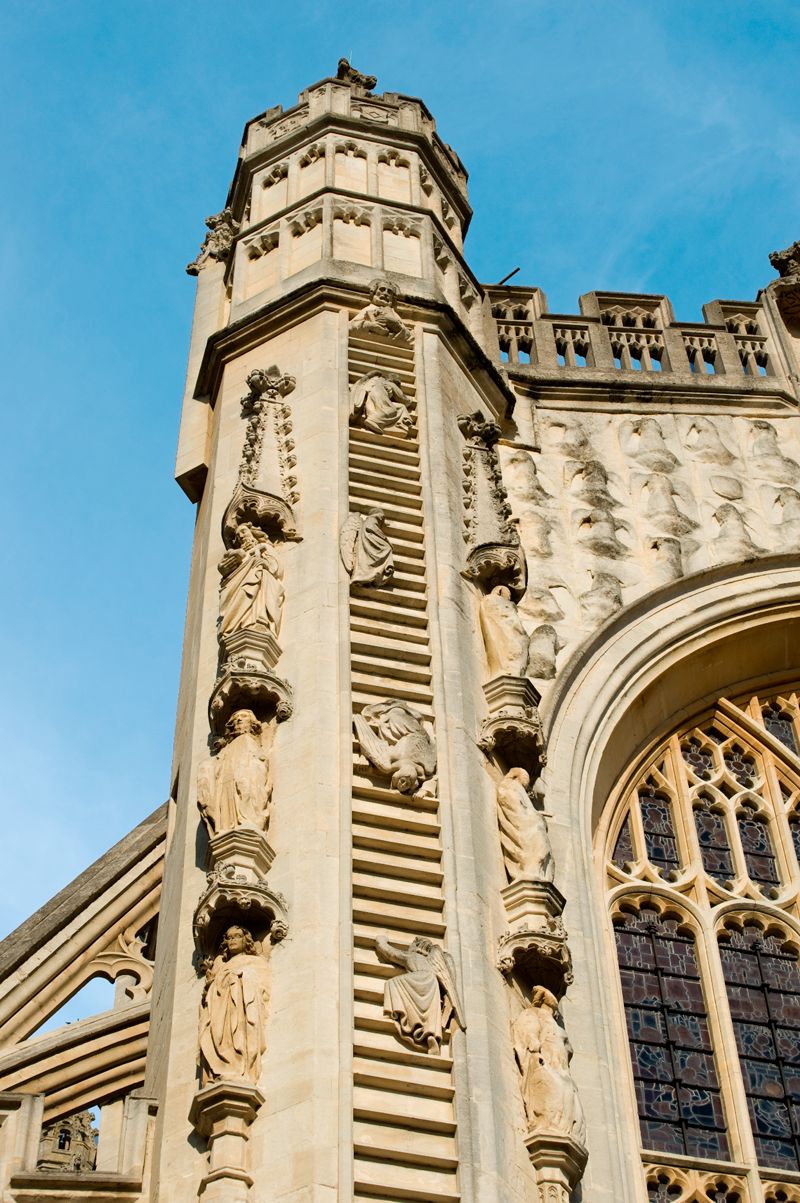 The Bath Magazine reveals fifteen facts about Bath Abbey and its 1,200 year history

1. There has been a place of Christian worship on the site of Bath Abbey for over 1,200 years and it continues to run as a living church today with services taking place throughout the week, including five services on Sundays.

2. The present abbey is the last great medieval cathedral to have been built in England. Building work began around 1499, but was not completed and used as a parish church until 1616, meaning it took nearly 120 years to finish.

3. Three different churches have occupied the site of today’s abbey since 757 AD. First, an Anglo-Saxon monastery was constructed but then pulled down by the Normans; then work to build an enormous Norman cathedral began around 1090 but the building lay in ruins by the late 15th century; and finally, the present abbey as we now know it.

4. The first sight most visitors have of Bath Abbey is the west front, with its unique ladders of angels. It is said that the plans behind this design were first thought up by the Bishop of Bath, Oliver King, who one night had a dream about angels ascending and descending above him.

5. Upon Henry VIII’s orders to dissolve the monastries across the country in 1539, the abbey lay in ruins for more than 70 years. The valuable parts of the building were taken away, including the beautiful stained glass windows which were ripped out and the roof which was stripped for the lead.

6. You could have bought the abbey for 500 marks (roughly the equivalent of £160,000) in 1539 when the abbey’s commissioners put the church on sale to the city, but remarkably this was turned down.

7. The first king of all England, King Edgar was crowned on the site in 973 and his coronation service set the precedent for the coronation ceremonies of all future kings and queens of England and Great Britain.

8. The abbey has a special chapel dedicated to remembrance. Known as the Gethsemane Chapel, an Amnesty candle burns on the altar and a Book of Remembrance which records the names, ages and addresses of all civilians and military personnel from Bath who were killed during the Second World War is on permanent display.

9. The abbey has 1,508 memorials in total – 617 on the walls and 891 on the floor. Only Westminster Abbey has more wall tablets than Bath Abbey. Contrary to popular belief, you did not have to be rich or from the aristocracy to be commemorated in the church. People from all walks of life are represented – from the Chilton family who were plumbers in Bath in the early 19th century to wealthy sugar plantation owners from Jamaica and Barbados.

10. The abbey’s beautiful ceiling is considered one of the finest examples of fan vaulting in the country. The stone vaulting at the east end dates from the early 1500s and was built by master architects Robert and William Vertue. However, the ceiling wasn’t finished until the abbey was restored in the 17th century, which is why we can see a slight difference between the vaulting at the east end of the church and at the west end over the nave.

11. Pews were only introduced in the mid 19th century, before that the majority of the congregation had to make do with standing throughout the services. The stone ledges round the walls were used by those of limited physical ability and the sick, giving rise to the saying ‘the weak go to the wall’.

12. There are estimated to be up to around 8,000 bodies buried under the abbey floors, the last one laid to rest in 1845. So far, the earliest burial which has been discovered under the floor is from 1625.

13. The church’s beautiful chandeliers were installed nearly 150 years ago but were only converted from gas to electricity in 1979. The chandeliers were fitted with energy-efficient LED lights in 2013.

14. The nose and sword arm of the monument to 17th century Parliamentarian general William Waller has been defaced – it is alleged this was by his opponents from the Royalist army during the English Civil War.

15. The choir screensmay look old but were only installed in 2008. There are 12 angels in total on the top of both screens, each playing a different musical instrument and conducted by an angel facing the high altar, modelled on Dr Peter King, who was the abbey’s director of music for 30 years until his retirement last year.

To find out more about the history of Bath Abbey, visit: bathabbey.org.