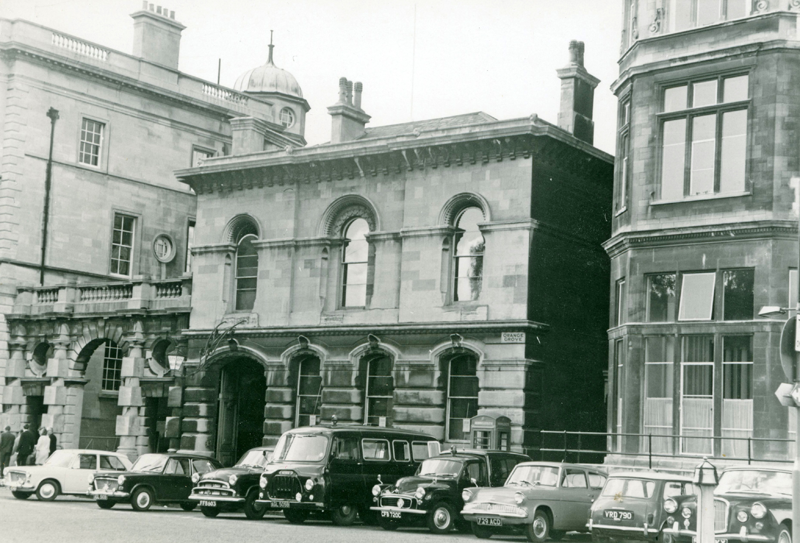 May the force be with you: 180 years of the Bath police

Bath was one of the first cities in England to create its own professional police force, one of the first to allow women on the force, and had the honour, in 1931, of being run by England’s youngest chief (Captain Jonathan Peel) at its helm, who was also a relation of Sir Robert Peel, the founder of London’s Metropolitan Police.

The first Bobbies on Bath’s beat stepped out into the city streets on Monday 15 February 1836. Prior to this Bath had relied on teams of unregulated and untrained watchmen made up of local free men and members of authority who policed separately the parishes of Walcot, the City and Bathwick. It was hoped their mere presence on watch would act as a deterrent to any criminals. The areas of Lyncombe and Widcombe were a no-go zone, considered un-safe, due to their lack of street lighting and their notorious reputations as areas of vice and crime.

The first organised police force in England is considered to be the Bow Street Runners, set up in 1748 by the author and magistrate Henry Fielding and his brother, John. Due to high levels of corruption and mistaken arrests, Henry decided to regulate and legalise the activity of officers working from his magistrates court in Bow Street, London. It was to become the guiding principle for the way policing was to develop.

Inspired by the Runners in 1829 the Home Secretary, Sir Robert Peel, launched the Metropolitan Police. Following its success the Government passed the Municipal Corporations Act in September 1835 which required all boroughs in England to set up regulated professional police forces.

In January 1836 Bath Corporation wrote to the Metropolitan Police Force to request copies of their regulations. A notice of recruitment was also displayed outside The Guildhall. Requirements were that men should be between 25 and 34 years of age, could read and write, were taller than 5 feet 7 inches without shoes on and they were “strong and free of bodily complaint.”

The men initially recruited appear to have been a mix of ex-watchmen and ex-military personnel. Pay in 1836 for starting Constables was 15 shillings per week, around the same as a labourer. Turnover was high, not only because many skilled men used the job as a stop-gap when regular work ran dry, but also as a number of men were dismissed on the grounds of drunkenness or debauchery on duty.

The strict rules and regulations of this new force soon weeded out unsuitable men. Constable James Connolly didn’t even make a day of duty, his absence was explained to be due to his drunkenness, while Constable George Turner was charged in June 1839 with not only being off his beat but being found on Bathwick Hill “behind a public house in Lilliput Alley assaulting a woman named Freelove Flower.”

The 132 men who began duty on that February morning in 1836 were overseen by Chief Constable, Captain William Farebrother Caroll RN, and a Watch Committee. The area Bath Police Force covered amalgamated the previous three watch districts, but also included Lyncombe, Widcombe and an area seven miles beyond these boundaries.

The original uniforms of Bath Police were based on those of the Metropolitan Police Force – white trousers, blue tunic, cape, and stove-pipe top hat. Blue was chosen so as to distinguish the officers from the military uniform of red. The jackets had a high collar to counter garrotting, while the cane-reinforced hat could be removed from the head and used as a step to see over walls. By 1863 the white trousers had been replaced by blue and the top hat by the more familiar “custodian” helmet shape. The city’s force lined up for an official photograph in 1897.

An initial teething problem was the fact that the uniforms could not be made in time for that first day of duty in 1836, and when made were not necessarily correct: “He was a tall lanky fellow whose height, he having joined late, the tailor had not taken into account.” (William Tyte’s description of a Widcombe Police Officer, 1837)

Every police officer was issued with handcuffs, a wooden truncheon, plus a rattle that could be used to call for assistance. By the 1850s the rattle had been replaced by a whistle; however the handcuffs and truncheon have remained a mainstay of police equipment, if somewhat modified over the years.

Each officer’s beat covered a set number of streets and each beat was timed to the nearest second and its length to the nearest yard. During the 19th century two-thirds of patrols were at night. Any observations Constables made on duty were reported to their Sergeant who would write up a report for the Inspector who would present this to the Chief Constable.

To fund the new police force money had to be obtained by raising public rates, which met with some opposition. The working classes also resented the interference of this new organisation on their personal freedoms and pleasures. The “move-on” policy of the beat officers meant hawkers and costermongers could no longer sell their wares on the streets, and a close eye was kept on public houses known to be frequented by prostitutes and thieves.

To be a policeman was a full time job in the 19th century. Officers had to wear their uniform even when off-duty and they could not eat or drink when on duty. They could not take bribes or gifts, were required to become members of the Bath Friendly Society, and, if not on duty on Sundays, they had to attend church services. Unmarried officers had to live in barracks at the police headquarters based in the old gaol in Grove Street.

By the 1860s better facilities for officers and prisoners were required. City architect, Major Charles Davis designed a new building in the Orange Grove which opened its doors in 1866 as Bath’s new central police station and cells. It also housed Bath’s Magistrates Court. Today the site is a restaurant, the cells now lavatories, although the arch where criminals once passed through still remains.

Most prisoners in the Bath cells were debtors, vagrants or petty thieves. More serious crimes were dealt with at the County Gaols in Ilchester and Shepton Mallett. By the 1960s, improvements at the Orange Grove site were needed. In 1966 a purpose built central police station in Manvers Street was created.

Bath police were not just responsible for safe-guarding the public, and property, in the city, but in the 19th century they were also called upon to act as firefighters. Bath’s fire engine was kept in a shed behind the Orange Grove Police Station and each new constable was trained in the use of hosepipes.

In the early days patrols were on foot, but in 1897 Bath Police acquired its first bicycle. In 1909 Bath’s first mounted division was formed and in 1932 Bath police purchased its first patrol car, an Austin Seven costing £128. By 1968 they had upgraded to eight blue and white striped Hillman Imps, fitted with two-way radios. In 1912 England’s first ever Women’s Police Volunteers Unit was set up in Bath. This unit was organised and run by women as an unofficial street patrol but didn’t last much beyond 1918. The circumstances of the First World War however led to Bath’s first ever female police constable, Miss Florence Glover. She had to leave though when war was over. Numerous calls were made over the following years for women to be re-instated in the police, but it wasn’t until 16 July 1939 that Bath saw its first two permanently employed police women – Dora Hay and Doris Sterry.

The name, uniform, equipment and regulations may have changed, but the police continue to uphold their original orders of 180 years ago – to patrol and protect the people, buildings and businesses of Bath.

Images courtesy of the Bath in Time archive: bathintime.co.uk @bathintime