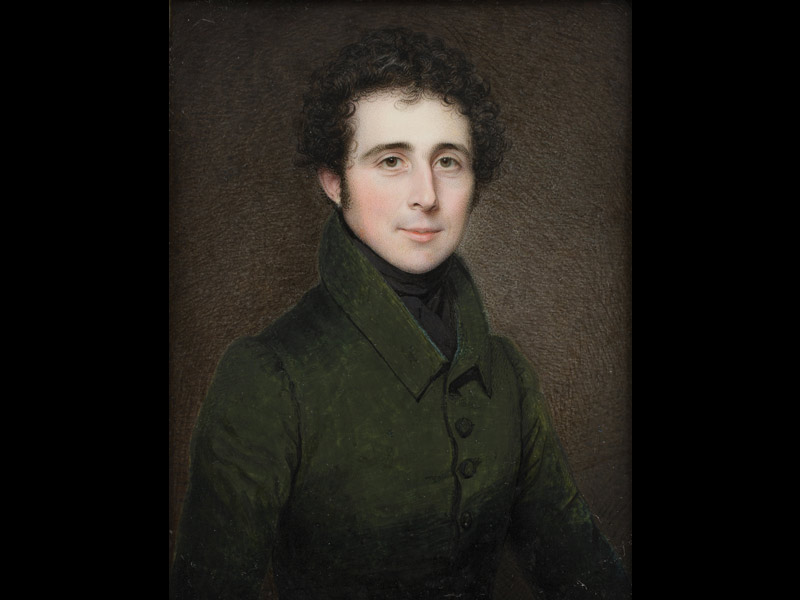 The legacy of William Holburne

As Bath’s first museum, the Holburne, celebrates its centenary in 2016 historian Catherine Pitt looks back at the history of the man who founded it…

Thomas William Holburne, otherwise known as William, was born in 1793 near Swansea into a minor aristocratic family who had a Baronetcy in Menstrie, Scotland and land in Nova Scotia, Canada. He had three younger sisters, Sophy, Catherine and Mary-Anne Barbara (otherwise known as Barbara), as well as an older brother, Francis. The family moved to Bath in 1802, living at No 7 Lansdown Place West.

The Holburnes had a long association with the Navy. Admiral Sir Francis Holburne, the 3rd Baronet (1704-1771), not only had a career at sea, but was also Governor of Greenwich Hospital in London and stood as an MP. William, at the tender age of just 11 in July 1805, chose to follow his grandfather’s footsteps and joined the Royal Navy.

In October 1805, William found himself at the heart of one of Britain’s greatest naval victories, the Battle of Trafalgar. Under Captain Edward Codrington, William fought on HMS Orion, which took the French ship Intrepide. His Trafalgar medals are on display in the museum today, along with a wooden snuff box said to be made out of the wood of a ladder from HMS Victory down which Nelson’s body was carried.

William’s career in the Navy took him as far afield as Brazil and the West Indies as well as around the Mediterranean, and he would have continued in this career if it hadn’t been for one significant incident. William’s elder brother, Francis, had chosen to become an Army officer, rather than fight at sea. In April 1814 Francis died from injuries sustained at the siege of Bayonne, France.

William left the Navy, with the rank of Commander, the same year. He was now the sole surviving heir to the Baronetcy, although he didn’t inherit the title until 1820.

Frustratingly little is known about William’s adult life. He seems to have lived as a gentleman of means in Bath and enjoyed the pursuit of sports, for he was patron of Bath’s Gun and Archery Clubs.

We might have known much more about William Holburne the man, had not the Holburne Museum’s Trustees in 1886 decided to destroy “all letters and accounts which were not worth retaining.” Who knows what diaries and documents may have disappeared? However, through the art collection he left behind, and documents in the archive, glimpses of the man shine through.

Holburne’s travels around the world during his naval career may have sparked an interest in other cultures and their art. He filled in any gaps there may have been in his formal education by embarking on a series of Grand Tours to Europe in the 1820s. The Grand Tour was once the traditional educational rite of passage for many upper class European men and women.

Delightfully, William’s passport survives from one of his tours. Between 1824-5 he spent 18 months exploring Italy, Switzerland, Austria, Germany and the Low Countries. Surviving sketch books and trade cards from Rome and Florence reveal that William visited mosaic-workers, picture dealers, booksellers and sculptors. It was expected of Grand Tourists to purchase artwork to bring home. These pieces were not only a proof of wealth and status but also an educational talking point.

Although William was from an aristocratic family, he did not inherit a grand house with art works in situ. His family were moderately well-off, but they were by no means able to lavish thousands on frivolous knick-knacks.

The funding of his collecting hobby came via auspicious means. In 1834 his aunt, Catherine Cussars died, and William and his sisters found themselves the beneficiaries of several trust funds, including one for £1,600 per year (the equivalent today of around £80,000).

William expanded his collections through purchases from local shops, auction houses and posthumous sales, such as that of Sir William Beckford in the 1840s. His passion for collecting is evident in a 1925 newspaper article which recalls an incident between William and a Mr Robert Walker at a shop in Stall Street some 60 years earlier. Both men were interested in purchasing some silver Apostle spoons, but Mr Walker was the successful party. William was so incensed by what he felt was an injustice “that he called the other a thief, for which he received a blow in the face which caused him to lose a quantity of blood.”

William’s collecting bug must have been influenced not only by his travels and tours, but perhaps also inspired from childhood visits to Harewood House in Yorkshire. Harewood was the seat of the Lascalles family to whom William was related via his grandfather. This grand house had (and still does have) a spectacular collection of art, furnishings and ceramics.

After their mother’s death in May 1829, William and his sisters moved into Number 10, Cavendish Crescent. This modest townhouse restricted the type of items William collected, but he made use of every available space in the house. Miniatures were much favoured, as were pieces of porcelain and silver, including 400 silver spoons.

The cramped nature of the house is reflected in an inventory made in 1874. Within the Front Drawing Room alone it was recorded that there were 21 chairs, nine footstools, 15 tables, five pedestals, three cabinets, 100 pieces of china, a score of paintings, plus a grand piano. His ceramic collection consisted of 1,300 pieces spread over three rooms.

Even during William’s lifetime he was aware of the significance of his collection, for he lent objects for major exhibitions in Leeds, South Kensington and Paris. He was also recognised in the art world through election to the Burlington Fine Arts Club.

Although William seems to have been meticulous in his collecting, it appeared after his death that he had been duped over the provenance of some purchases. Two hundred items were rejected from the museum’s collection in the early 20th century, including a fake Leonardo da Vinci and a phony Roman vase. Despite this, William’s collections, such as his Post-Classical bronzes and Italian and Dutch paintings are considered as some of the best in Europe.

After William’s death in 1874, his sisters continued to live in the claustrophobic conditions at Cavendish Crescent. Neither William, nor his sisters had married or had children. On the death of the last sister, Barbara, in 1882, the contents of Number 10 were, as per William’s wishes, bequeathed to the city, to be on permanent display for education and enjoyment.

A board of trustees was set up and a suitable building sought. Although Barbara favoured the Sydney Hotel on Great Pulteney Street, legal issues over this site delayed the purchase. Just to find somewhere for the collection in the interim period was to take 11 years. In 1893 a temporary site was found at the old Bath Savings Bank on Charlotte Street.

In 1912 the Trustees were able to purchase the old Sydney Hotel and transform it, with the help of architect Reginald Blomfield, into a permanent museum befitting the memory of William. The Holburne of Menstrie Museum opened its doors to the public on 6 June 1916, and was the first official public art museum in the city. Visitors could view the collections in the Ballroom and Watercolour Gallery on the first floor, and in the Picture Gallery on the second floor. On the ground floor there was the trustees’ meeting room and apartments for the curator and caretaker.

Today the Holburne is a well-loved building, hosting many activities and exhibitions for adults and children. It reflects the passion one extraordinary Georgian gentleman had for collecting art, and his desire to share this with the world.

The Holburne is curating three major new exhibitions this year:

Jennifer Scott, director of the Holburne Museum, said: “2016 is an exciting moment in our history as a vibrant cultural hub at the centre of Bath. We are delighted to mark this with three original exhibitions of outstanding quality, curated in house to celebrate the best of Britain’s national and regional collections.”

Stubbs and the Wild (25 June – 2 October). This exhibition delves into the 18th century world of George Stubbs through his animal studies and fantasy pieces. The exhibition presents the early encounters between polite Georgian society and the wild creatures and places depicted in Stubbs’ work. The uneasy relationship between the domestic and the exotic is explored through important paintings, prints and drawings by this artist, curated by Amina Wright.

Silver: Light and Shade (22 October – 22 January 2017) tells a new story about the properties of silver, conveying its visual impact and its infinite potential for creative, design-led objects. Curated by Catrin Jones and Vanessa Brett, the exhibition will include significant loans from UK collections to reveal the aesthetic potency of silver from the 16th century to today.