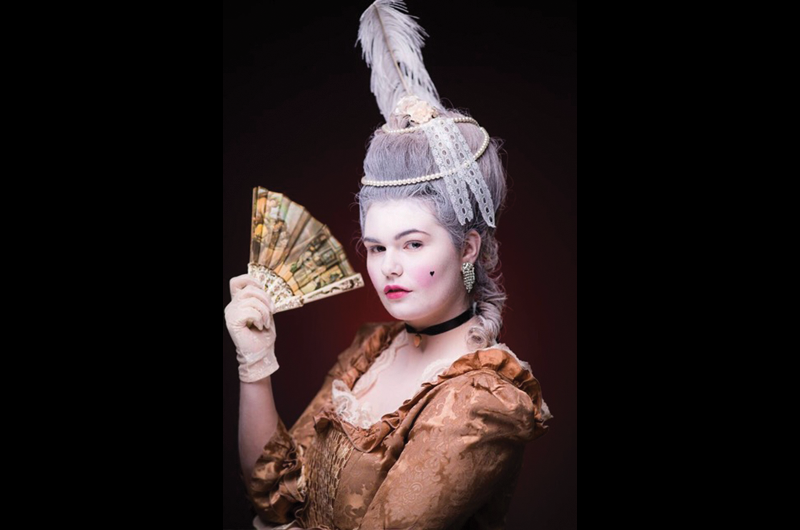 If looks could kill…

If we could turn the clock as far back as 300 years ago, we’d find our Georgian forebears were just as preoccupied with their appearance and youth as we are in the 21st century.

The ideal of beauty in 18th century England was an exaggerated naturalism. A pale complexion denoted that one didn’t work. Sun tanned skin, freckles and any blemishes were seen as a sign of the lower classes or of disease.

The soft, smooth, white skin of youth was recreated and heightened by an even covering of white ‘paint’ on the face, neck, chest and even hands. Blue veins were then painted on top to create the illusion of skin. Lips were stained red and cheeks highly rouged. Eyebrows were raised high and black crescent-moon shaped beauty spots, patches or mouches were selectively placed on the face. Hair was swept high off the forehead and usually in the form of a powdered wig. This look, incidentally, was aspired to not just by women.

The ladies and gentlemen of Bath would have slathered their faces and skin with various concoctions containing white lead, arsenic, mercury, spermaceti, carmine, and other unpleasant and unhealthy ingredients. Bath shops, such as Mary Purdie’s on North Parade and Richard Warren’s in Alfred Street advertised in local pamphlets and newspapers detailing the cosmetics sold, including Lady Molyneaux’ Liquid Bloom and the popular Gowland’s Lotion, which contained mercuric chloride and stripped back layers of skin in a somewhat extreme 18th century method of micro-dermabrasion.

As the century progressed, the danger of some cosmetics became more widely apparent with a number of high-profile deaths. In 1776, the actress and courtesan Kitty Fisher, one of the first great British celebrities, died at the age of 26 in Bath, allegedly from the effects of the lead-based make-up she used.

Georgian make-up could cause hair and tooth loss, plus lesions on the face; yet to disguise the damage done people would apply even more make-up thus exacerbating the problems.

By the late 18th century the consumer looked to more natural organic ingredients, mainly consisting of vegetable dyes. In Bath in 1787 Mr Cratwell and Mr Moore sung the praises in a local paper of their Venus Vegetable Bloom that was now available to purchase from them.

For those not naturally blessed in the looks department, cosmetic aids were available. Eyebrows were often shaved off and painted higher up the face, but for some the use of mouse or mole-skin as a false brow was preferred. If one had sagging features due to illness or the ageing process then cork padding could be put into mouth cavities to fill out any sunken areas. False teeth were not uncommon whatever one’s age, and these were made from real human teeth from the poor or dead, or carved from porcelain or animal ivory. Hippopotamus ivory was much coveted for it was believed to be the nearest colour match to natural teeth.

Makeup had initially been used mainly by prostitutes and actresses, plus was often an aid to disguise disfigurements caused by illness or sexually transmitted diseases. The same was true of facial patches. These could not only indicate one’s political leanings (left cheek for a Tory supporter, right cheek for Whig), but could also, through their position on the face, be a useful communication tool to sweethearts and potential admirers.

It is misleading to imagine the balls and gatherings in Bath to be glamorous affairs. Heavy make-up, powdered wigs and unwashed bodies would have created an atmosphere more akin to the description of a Bath Assembly given in Tobias Smollett’s Humphrey Clinker: “Imagine yourself a high exalted essence of mingled odours arising from putrid gums, imposthumated lungs, sour flatulencies, rank armpits, sweating feet, running sores . . . plaisters, ointments . . . spirit of lavender, musk, hartshorn.”

To resolve any odour issue the Georgians wouldn’t have considered immersive bathing, except at the Baths as part of medical treatments, but preferred to mask smells with perfumes and oils. In Bath these could be purchased from specialist perfumers like Mr De Coppa, an Italian dealer who could be found at the sign of the Civet Cat in the Abbey Church Yard.

Hair, like makeup, was dictated by fashion in 18th century Bath. Red or grey hair was unfashionable, and local shops advertised the sale of hair dyes or recipes to change the colour. Hair loss was associated with illness and disease. William Moore, who operated from the Orange Grove and High Street, did his part to cater for locals who were follically challenged by producing in 1777 a 40 page pamphlet, The Art of Hairdressing and Making It Grow Fast. How successful the outcome of his advice was we do not know.

Both men and women tended to wear wigs, except for the very poorest, and had a plethora of styles to choose from. For men, from the 1720s the full bottomed wigs so favoured in King Charles II’s court gave way to the much shorter, powdered wig, styled into designs such as the sack-wig or campaign-wig. Some women had their natural hair weaved into their wigs, but more often than not, for comfort’s sake more than anything else, both men and women shaved their heads.

Women’s hair styles tended to become more flamboyant as the century wore on. Padding of horse-hair, cork or even iron structures, were added for volume and to create styles; plus ribbons, combs and feathers abounded. Eventually women’s wigs got to such an extreme in height and style that they were soon lampooned in print and press by illustrators such as Rowlandson, and writers such as Bath’s own Christopher Anstey.

Dressing, styling and powdering hair was time-consuming. In John Wood’s original home on Gay Street one can still today peek at an extant Powder-Room where a lady or gentleman would sit, covering their nose, eyes and mouth with a paper cone, while the hairdresser applied powder with a pair of bellows.

The powder stuck to the hair and wig by means of a pomatum made of fat or oil. With some hair styles remaining unchanged for weeks if not months, it was not uncommon for wigs to become fetid, and for fleas or lice to hatch inside. A Cornish parson, John Penrose, who visited Bath in 1767 expressed shock that many had their own hair incorporated into these toupees since “(they) do not comb their heads for three months and endeavour to conceal the stink with perfumes, essences, etc”.

The cost of wigs could be very expensive. John Bally sold his in the city for between 16 shillings and 2 guineas each (around £50 to £150 in today’s prices).

They were considered prized possessions, and in fact some Georgians regarded their hair so highly that they left their wigs in their wills to family or friends.

Enough barbers, hairdressers and peruke (wig) makers abounded in the city in the 1750s that it necessitated a Guild being set up. These mainly male frisseurs catered for both male and female clientele. Some came only to Bath when it was the season, much to the chagrin of the local hairdressers. Competition was fierce and the advertisement of exotic credentials or important clients seemed an added enticement. For example in 1769 a hairdresser simply called Nadal advertised his arrival in the city to Kingston Buildings direct from Paris.

After the French Revolution in 1789 English ideals of beauty and fashion attempted to move swiftly away from any French influences, and instead looked to the countryside and the classical world for a simpler natural style.

In 1795 the government set about taxing hair powder which tolled the final death knell on the excessive appearances of the 18th century. From the 1800s onwards a wig was really only the mainstay of doctors, lawyers and the clergy. Today, the modern barristers’ and high court judges’ horse hair wigs are the last vestiges of an old custom.

Despite the poisonous potions and puffed up perukes available in 18th century Bath, locals and visitors alike could not keep the ravages of age at bay.

“That Beauty lives and ne’er will fade Tis false: Those wanton curls will fail That rosy colour yield to pale… This face, these eyes, Which once could please, they now despise.” – (Advice to a Lady, Anon, 1765)